I went to Lucknow in the year 2011 and was mesmerized. I finally got a chance to take one week leave from office and went to attend my brother's IIM convocation. The moment I stepped in to the city I realized the nawabi(royal) grandeur of the place. Every lane and every minar exuded poetic reminiscence. Needless to say I fell in love with the city.Other than the university campus of IIM the rest of the city felt like it belonged to past and we traveled in time machine to the era of nawabs and the time when Britishers ruled India. Today I just am posting few pics from my Lucknow trip and describe a bit about the places in the pics.  The day we reached Lucknow every one was celebrating Holi and it was one heck of a sight but all the shops and hotels were closed, so most of the day got wasted. We only roamed around a bit exploring the empty roads of the city. People were very pleasant and hospitable & offered the Holi special gujjia  and Lassi to us where ever we went.

First and foremost place I visited in Lucknow on the 2nd day of our trip is "Bara Imambara" . Bara means big and Imambara means shrine. It was built by Asaf-ud-Daula, Nawab of Lucknow, in 1784. It is a shrine built by Shia Muslims for the purpose of Azadari (source: Wiki). Azadari means mourning during muharram. The architecture is grand and mindblowing. The complex has a mosque , the bhulbhulayah (the labyrinth), and bowli, a step well with running water. I also went to Chota Imambara which is built by Muhammad Ali Shah, the third Nawab of Awadh in 1838. The building is beautiful with chandeliers which have unique designs. It looks gorgeous when lit up during the night. This place acts as Nawab's and his mother's mausoleum. It also acted as a congregation hall for the shia Muslims.


The above pics are clicked by me. I didn't get a chance to click chota imambara in the night. The below one is downloaded from wiki

Rumi Darwaza is one more beautiful structure near the Imambara. It is just a gate  and is a fine architectural style of Awadh. We went to do some shopping and bought some beautiful Lucknow chikan work dresses and sarees. If you ever visit Lucknow don't come back with out buying the chikan work dresses. They are gorgeous, original and are sold at reasonable prices.

The Hussainabad Clock Tower (Ghanta Ghar) is an elegant sight in the Lucknow's historical area. The tower is well maintained and it is the tallest clock tower in India. The clock is still operational. It is one of the finest examples of British Architecture in India built in 1887. Click on the link to know more. 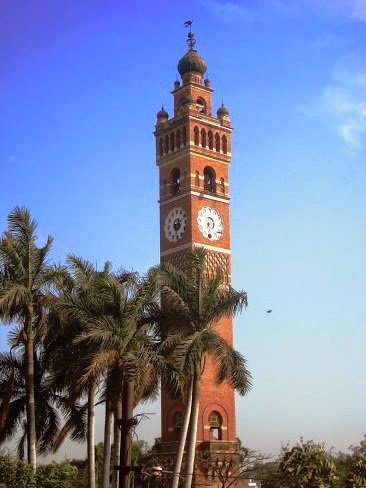 British Residency in Lucknow is in the heart of the city. It served as the residence for the British Resident General who was a representative in the court of the Nawab Saadat Ali Khan II. You can only see the ruins now but each brick speaks volumes of history. The building also acted as a hiding place during wars and unexpected attacks. It was a refuge for British soldiers during the revolt of 1857. We roamed with out the help of a guide but still could read and understand about each building with the help of sign boards. Few buildings still have the bullet holes. The museum in the complex is also well maintained. Below is a glimpse of the residency.


We also visited another pristine white museum near to Imambara (the name of which I forgot now). It had all the nawabi memorials , their attires, jewels , photographs and much more. I love museums as I my mind's imagination runs at the speed of Cheetah. I get lost in that era and imagine those people when ever I visit a museum.


The moment of pride during the Lucknow visit is when my brother received his MBA degree. The convocation was a happening event with a lavish dinner and my mom dad's smiles were worth watching.

Last but not the least thing you must and should do if you visit Lucknow is tasting the royal Galawati kebab. It is a traditional Awadhi recipe. ‘Galawati’ means ‘ melt in mouth’. History says that galawati kabab was specially made for Asaf-ud-daulah, who was aging and had week teeth but was a meat lover. This recipe is made up of minced pasted meat and hence does not require chewing. On the present day and time this is the most famous recipe through out India but none can get it right. One must taste it only in Lucknow.

There are many other places which can be well described but for now I am ending here. As and when I can recollect some more things we did in Lucknow will write another post. By the way if you ever visit the city do not forget visiting Hazrat Gunj - the famous shopping complex. From Lucknow we went to Agra, Jaipur and Ajmer but saving them all for rainy days on blog and for other days of the challenge ;)

Shared below is a song from a movie DedhIshqia which was shot in U.P. and the whole movie flows like a poem. This movie reflects the nuances of  U.P. and Lucknow very aptly. This song is a poetic rendition by Naseeruddin Shah