Amit Sharma has been one of my favorite bloggers . I started reading him some where in 2012 at mashed musings which has now moved to http://amit-sharma.co.in/blog/and instantly became a fan. The humour, plethora of emotions , his opinions on sensitive topics which were most of the times in sync with mine, his daddy diaries and many more write ups kept me always glued to his blog. So when I came to know that his book, False Ceilings got published , it was just natural to think of buying it. I was highly elated when Amit sent me a copy of False Ceilings. I would anyway have bought it but the personalised copy made the book more special. With out much ado let me share how I felt while reading the book.

Story line and my Review

The book starts with Aaryan and his , "if - else" statement amusing the readers as they will start thinking, what it is all about. Amit grabs your absolute attention from the very first page and some where the coder in him seemed wide awake. Page by page he connects you to all real life scenarios and tragedies where the if-else happens zillion times! The book keeps oscillating between different eras. In total, there are four different eras, pre independence , just after independence, 1980s and the years spanning from 2017-2060. However different the eras and modes of living are, it all gets hazy as so many emotions from different eras seem similar. The chapters flow seamlessly from one era to another but bemuse the reader as so many characters start dancing infront of him . When the puzzled reader uses all his might to connect the dots, there comes the secret wrapped in yellow cloth which does a parade on mind. 1980s and the then NewDelhi are perfectly captured. The book increased my awareness on tragic events which happened in our country years back, like for instance, I came across Operation Blue star in the book and understood thoroughly what it is for the first time! The scenic beauty of Dalhousie of 1930s and also the later decades is also captured so wonderfully!

The secret which is passed on between the generations  intrigues the readers. For a moment I felt, some sci-fi secret is embedded in it due to the tragic consequences it supposedly leads to, but unleashing the secret was a surprise to me. The suspense in the story was kept intact till the last page. Ultimately I realised that hatred , jealousy and obsession are the open secrets which can destroy the harmony and hamper the bonds in a family. Be it a family or the nation it was shown realistically how open rebuke can lead to severe damage! The blurb gives a peek in to what the book would be narrating and the reader travels from the narrow passages between the hills in Dalhousie, to the busy Connaught place of Delhi and also can visualise the sikh riots and the terror the country faced in 1984. As we enter the futuristic era of 2017-60s, where everything is fast paced , where our soups are in the form of capsules, I wondered has everything actually changed. Aren't the emotions, the love, hatred and confusion still the same ?

Be it Shakuntala , Meena , Lipi or Manohar , Vinod and Aryan , some traits are just passed on from generation to generation. There were junctures when all characters looked extremely blurry to me but then everything falls in to place and head gets clear as the book ends. Other than the entangled human emotions, there is so much more to know from pre independence and post independence eras. The book also reflects the scenario where when one is a continuous victim to other's venomous mind and caustic tongue there is a fair chance that they become venomous too!

All in all , the book makes a great read and will not disappoint you at all. Only desire I had was to know more about the futuristic time-zone - of 2060s. I would have loved to know and imagine more about the technology and how things worked after 50+ years but in any century humans will be humans is the crux of the story! You may feel like searching your own false ceiling and decoding the deeply embedded secrets of your life once you finish the book!

I am awed as it is just Amit's first book. I wish more power to his pen and good luck for all his future works!

You can buy False Ceilings on Amazon and Flipkart . Do visit Amit at http://amit-sharma.co.in/ and share your views.

We were always told and taught that, honesty is the best policy
Our actions were controlled by this guideline, till we realised it's a fallacy!
Childhood was easy with a heart as clear as water.
As the years get added up, the emotions get complex and we falter! 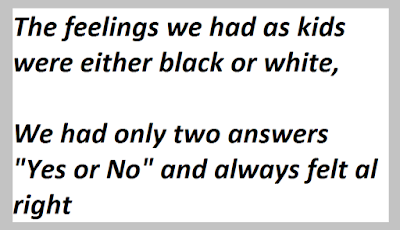 The feelings we had as kids were either black or white
We had only two answers "Yes or No" and always felt al right
As we grew, the airtight heart started battling and lost the vigour
Not every thing was white or black for us as the visionaries got greyer!

Requesting a simple thing we needed was a piece of cake then
Asking for a favour now takes all our energy and all our might
All our colourful dreams then, always took shape in a happy flight
Growing up meant practicality and made us calculate our delight!

Being inquisitive was an achievement in the past
As we grew, we realised it is an asset to run the race and be fast
Whatever we ask or don't ask, was always provided to us
Being dependable now is an act which is considered as a big minus!

It is a common phrase to say, "Honestly I think!"
We all say it nonchalantly with out even a blink.
But do we always mean every thing we say with or without a thought?
We forget most of the words spoken or heard by us which in the long run rot!

Yes, we are hearing it from ages that honesty is the best policy.
But indulging in honesty sometimes makes everything topsy turvy!
Everyone loves your honesty until you are honest about others with them
Your practice falls flat, when you are honest with them about them !! :)

Second Spring is the debut novel by Sandhya Jane which narrates the life and happenings of Avantika a single mother, who has a strong persona and is highly successful in her profession. The book is all about the ups and downs in her life because of the love which hits her a second time, and on reading the synopsis, I felt the book will mostly reflect the hardships faced by Avantika in a innovative way but sadly I am heavily disappointed as page by page, the book felt like a daily soap or a Bollywood flick. I don't want to sound rude, but I was bored after finishing 50 pages. The story was going no where and was absolutely predictable just like any Hindi movie! First few pages made me feel may be this book has more to it than just the love, spark , infatuation and confusion episodes between Rohan and Avantika but I was wrong. The book has redundant episodes and thoughts of Avantika and Rohan. I really felt, the author should have done more work on editing and removing the repetitive lines. Avantika's son Aarav's bond with his mother was some thing I enjoyed as it showed how single mothers can get deeply attached to their kids. Other than this , I liked few tidbits like, description of the corporate atmosphere, the necessity to be quite social and the tactics one should possess to improve networking so as to have career progress. The respective episodes felt real and the author described the projects , meetings and presentations aptly as she herself works for an investment bank I believe. The intervention of Facebook and how lost friends can be searched and found is shown well. The life and episodes of Rohan and Avantika during the time they spent together, and after they part their ways covers 90% of the book. It is possible that the turn out of all the events can be a real thing, but the way it was narrated, I felt I was watching some hindi movie from 80s - 90s.
Avantika slogs for the progress of her company and herself but it feels bad to see that she shifts to Missouri (USA) only to forget her love.  By the end of the book, the only thing I could appreciate was that the protagonist Avantika carefully and confidently chose what she wanted , with out falling in the booby trap of emotions once again but even this felt like, I was watching the climax of the movie Hum Dil De Chuke sanam . The book oscillates between Rohan and Avantika's diary pages thrown between infinite number of meetings and office hours. Rohan's family pressures, forced marriage and orthodox beliefs are all highlighted which are day to day problems in India but on this date and time when things are slowly changing , I could not relish the age old story line where he sacrifices himself for arranged marriage and so many lives ultimately get destroyed. The surprising element in the book is Rhea, a kid who is the love child of Avantika and Rohan. This surprise totally failed the story for me as once again , it got too filmy where in kids are born as easily as coffee comes out of vending machines, just by spending one passionate night together. Again it is a possible scenario but I couldn't make myself like it! Sorry to say that the book is too clichéd and I couldn't enjoy it.

I am not an author myself but there is a lacuna in this book even if it had good language and vocabulary. A weak plot, routine story line and monotonous episodes made me want more from the book.

I wish the author good luck for her future endeavours.

This review is a part of the biggest Book Review Program for Indian Bloggers. Participate now to get free books!