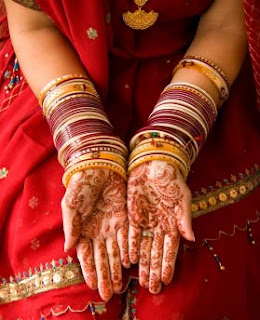 Wedding bells wedding bells Weddingszzzz all the way!!
recently most of my cousins got married………The thing which surprised me is How can any one get so easily acquainted with a total STRANGER… he/she BOTH!? Coming to me I need ages to get friendly or share things with some X . I am kinda introvert and I need time to gel well with people around me. BUT if I gel well…I am sure it lasts long! So were many others whom I know…but when it comes to FUTURE wife/hubby how can they gel well so FAST ???:) sharing each and every minute thing they do..keeping track of each and every minute of their day….Sending LUV SMSES …emoticons….(kisses hugs hearts so on ) wearing each others favourite colored dresses / Jewellery eating or drinking each others Favourite drink….So on so forth !! OH MY GOSH!! Doesn’t it get boring at one point of time….I Thought to my self…then I again thought to my self MAY BE IT Gets boring to others but not to them..Infact it gets interesting day by day and thrilling I GUESS!!---provided they enjoy each others conversation….

I have seen people practically Showing their emotions with out hiding the slightest of them And publicly displaying AFFECTIONS! Well I didn’t approve it much but I don’t know at that juncture how I would behave :P will I be totally dreamy or stay in my senses… AM Seriously not sure of it. When it comes TO DREAMS I am a day dreamer and I can beat most of them in this..SO !! may be I would behave in the same way :P :P :Pone of my friends stores his wifes name as sweetu…They Are not even engaged :-o OOPS!! I thought so much LOVE already…What’s this magic? Is it REALLY love ??or affection generated out of compulsion of getting committed / married! Am not sure. What ever it is its sweet I guess…TO SOME Extent…I have also seen boys who practically get pissed off by such stuff ….The girl calls him “hi jaaanu Dear wassup ? get up na its already 8 (Few girls express a lot U C :P) “ then he controlling his urge to puke responds “Yaaaaa am getting up (WITH A PAUSE and lot of effort) DEAR!!” Yeah it doesn’t come naturally to all…it takes time for few To address even the dear dear sugary lolly sweetus like jaanu deary rolu polu or whatteva!!

May be its needed to act to make others r happy though not so content with one self or may be its better To be the way U R I am not sure….My mom often says…theres no harm in expressing emotions …as it will be repaid one day or the other!So I follow it—I fail at times and I am not sure about the results…One of my very close friends was getting married..She was not sure if she has to marry that man As nothing was working between them No common talks..No common choices…If he likes techie stuff…she likes discussing movies…TV..news etc…If she likes tea …he hates it..if she likes eating out he prefers home made Cuisines….He is not able to woo her…she was not able to impress him…They hardly speak to each other….I mean if she talks to me in ph for 30 min …with her would be its just for 10—15min…She was very much worried as to WHAT she is going to do to about their relation….Will she be happy at all!? Then I told her the same thing she told me Few years back!! That “ You have no choice to select your parents and like each and every aspect of theirs..U like few things dislike few but u gotta stay with them…U get used to it…and above all U LOVE each other so u can undermine minuses and MAGNIFY plusses “ ahem sounds heavy!! But that’s the only thing I could tell to her at that point of time….NOT sure she followed it or not….

The main thing is marriage shouldn’t be at toss…so ITS better u behave In a manner he likes u to or she likes u to---Not always but when u feel like its needed then…………Adjustment in a new relation is very much needed by either a boy or girl or its perfect if its by both …Its an age old thought that when it comes to adjustment…Girls top in it being more understanding compassionate ..sensitive and patient…but times have changed…GIRLS need their space these days They cant act or adjust always…EMOTIONS are not selfless anymore ..When U Give U demand…They have freedom of thought…equally knowledgeable and equally or may be more hard working…..they also are confident enough and they also get tired…They also act the way they like most of the times…Doesn’t mean they don’t give a damn about their husband or boy friend…but When they GIVE a DAMN they expect the same in return!!

Coming to LOVE Vs Arranged marriage ..its an age old topic and I don’t wanna waste space for discussing it…Its just that….Commitment compromise and adjustment is needed in both,,,,

My perspective is When things go wrong (Not being pessimistic ) but things often go wrong,,,,,so when things go wrong Arranged marriage is less painful than love marriage as in the first case the person is total stranger to U! and u give him some time…BUT perfection is expected in a LOVE MARRIAGE (in most of the cases )……Again its my perspective…different people have differing opinions!!

Many people have misconception that ITS BOYS WHO spend money and girls sit and have fun!!but I say a big NO NO for this….YES BOYS do open wallet many times…and don’t ask about ph bills…….its like a mini Ramayana The size of it..but if a boy doesn’t call one day (After the girl gets used to it) a confused hypertensed Silly girl calls him 100s of times…wondering y he did not call,,,,,Now a days (I HAVE SEEN) girls also make equal number of calls no matter whatever the size of the ph bill is….and they also do spend if THEY EARN! Times have changed so is a girl….

It might be a controversial statement but girls are HIGHLY emotional beings on the EARTH but no Tom Dick Harry can steal their desire to BE PRACTICAL if they really wanna be practical….They are meant to be emotional…After being highly emotional Don’t make them bend towards practicality ….coz its tough for her to come back to her emotional self!! A girl though physically weaker species mentally Unusual strength she has got! ---gifted by GOD! Many situations which a boy THINKS he can handle but cant….Girl handles them easily even if she is unaware she can actually I have seen a boy who forgot having head bath regularly and got used to booze and smoke for ever after a girl ditched him and I have seen a girl who cried to her hearts content but got ready in a nice dress after a week and went to a movie with girl friends… AGAIN Its not about who wins ….there are differing TYPES in both species…its again a open question if the boy who boozes is really sad ? or if the girl who is going to movie is really HAPPY!!?!?---Not sure!!!

Anyway The magic has begun BETWEEN x and Y long back when the wedding got fixed with all the romantic talks chats….and still continuing… I hope it doesn’t wear off FOR LONG!! I am still clueless as to how it starts and how both are Attached to each other SO FAST!!--> I was just so excited seeing the sparks and joy in their eyes….GOD bless all THE couples and love birds! And I pray they have a FRUIT FUL Life

Girls are very sensitive about relations…..So are boys !!:)am not forming a anti boy committee here….BUT I just want both to stick to it……..WITH out playing a win/Lose game…Make it a win win situation and spend Happy TIMES!!:)