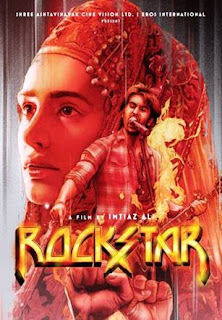 Naadaan Parindey Ghar aaja.... O naadan parindey Ghar aaja, kyu desh videsh phire maara..Kyu haal behaal thaka haara!
Am just singing this song from two days and haven’t stopped yet. This movie’s music gripped me long back but it house arrested me from more than a week. It’s been long since I wrote a movie review but this master piece had enough of my attention, so here I go.
Imtiyaz ali, the man behind is a genius , a man who can not only make the hero strike the guitar chord and make it look so real but also strike the chord of emotions in everyone! He is one of the best directors India has got. I always liked Kunal Kohli for Hum Tum, Farhan Akhtar for Dil Chahta hai and Mahesh Bhatt for Dushman, Zakhm,Aashiqui and many more but this man Imtiyaz ali is different. He pours his soul in the movie. I hope he lives up to it always and directs awesome movies in forthcoming days! He is a man who can mix all kind of emotions in subtle amounts without giving you that melodramatic feel! He is the real rock star to me, who laid foundation to this and of course there is no need to guess who the other rockstars are. Am glad India has artists like Mohit Chauhan and A.R.Rahman. I take a bow to the intensity of their singing and the way they breathe life in to a song! Am ecstatic by the fact A.R.Rahman has many students! I literally closed my eyes when Naadan Parindey and Jo bhi Main and Kun Faaya Kun were being sung and enjoyed to the fullest.The other favourites are Katiya Karun, Tum Ho and also Hawa Hawa .The reason for liking the last one is the transformation of Heer, she actually springing back to life once she meets her Jordan is so damn beautifully shown. I didn’t feel a teensy weensy bit of the movie boring or unnatural or not so needed! The opening scene and then series of scenes showing how Janardhan evolved to Jordan are amazing! THAT MOMENT I REALISED THIS RANBIR KAPOOR IS NOT GONNA BE THE ONE I Watched all these years. He too evolved and how can I express my euphoria! I loved him in each and every frame/ every style/ every costume/ comic/ tragic scene and everything! Ranbir was cute in Wake up sid, a lover boy in Bachna aye Haseenon, intelligent in Rocket singh, Angry young man in Rajneeti but he seemed to be a mix of all along with many more blended emotions in him in Rockstar!
Whoaa love you Ranbir! My words are falling short to express how much I liked himJ 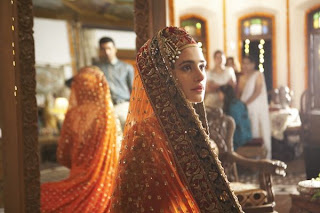 Nargis Fakiri is definitely pretty but an immediate glance at her reminded me of Preeti sabarwal of Chakde. Like Ranbir says to her in a scene in the movie I too didn’t feel her too hot/cool/gorgeous but she is definitely charismatic with a rose petal like complexion. She gave a more than satisfying performance being a new comer. She was very natural in most of the scenes she acted, but with her huge pout and too long nose I felt the tragic scenes and tears were little awkward. She should definitely work on them, may be the tears or the lips J, but when a person can love the pout of Angelina Jolie or a Keira Knightley I don’t know why such a fuss is being made that “Nargis and her pout or her tears spoiled the movie.” I think it is a “style/YO” statement to hate everything which originates in Bollywood and flaunt that you just don’t belong here. Can’t help saying this as I met such people lately! I watch many English movies and I absolutely love them too but I am deeply connected to Bollywood and India. I feel connected to many nice things shown in many nice movies and I request those critics who are so loyal in their job not to list out all the flop movies one by one to strengthen their crappy arguments. To me she definitely was new, spicy and acted lot better than many known faces in Bollywood who took 5yrs to a decade to bring out their acting skills. Of course here credit goes again to Imtiyaz for bringing the actress in her out! My most favourite Nargis Fakiri scene is during her wedding when she asks Ranbir with mehndied hands “can you hug me ?!” “Jaldi me ho kya?!” “Ache se karo na!!” 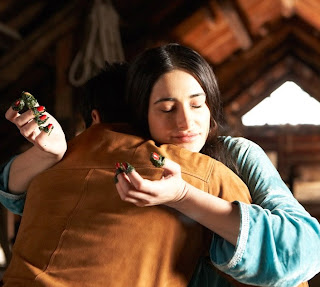 When I was watching that scene I felt this is one such love story I am gonna remember for long. This lovestory is neatly done and makes everyone feel that one should have such passion for their boy/girl and lead a happy life ever after though realstars and rockstars have a magnifying differenceJ. There is a Hollywood tinge in this movie, the way it was presented. Watching the camaraderie of Heer and Jordan I unintentionally remembered My Sassy Girl, Before Sunrise, P.S. I love you, The Notebook kind of movies. The hottest girl of college –Heer is full of life only when Jordan is near to her. Of course its shown love can do miracles and she gains strength in spite of her serious illness, and I didn’t find it unnatural at all as love does miracles. Oh boy, I loved that scene too where she energetically and enthusiastically comes downstairs for breakfast and when Jordan is waiting at the door, kisses her mom with a broad smile and leaves, leaving a pleased happy mom behind!
Everyone should list down the crazy things they want to do in life which may or may not be bold like Heer’s wishes, should have a crazy companion as doing a crazy act aloof is not so much fun and then get that euphoric feel of accomplishing it J Some said the ending is foggy but I guess an artist would like even that. Naadan parindey song and the hope that she will come back, I don’t think there can be a better end. Having leaked many spoilers, do not want to narrate all the scenes and spoil the broth! Rock star is like a sweet/sour/salty/hot/spicy soup. Mohit Chauhan has travelled a long way taking the silk route and gave to us that silky, smoothening touch with his voice. Want to watch him playing guitar once and strike a chord along with him. Wow the thought itself is giving me goose bumps! A.R. Rehman has done an awesome job in Kun Faaya kun so did he do a great job in rest all songs. It seems the one who played guitar in Sadda Haq is from Michael Jacksons troup. Orianthi Panagris, a 25-year-old guitarist was the lead guitarist in Michael Jackson's This is It concert. Nargis Fakiri is a half-czech half-Pakistani model.Talent either local or imported had a magical impact on those who got a share of it and this review would be incomplete without conveying kudos to Irshad kamil my most favourite lyricist !Climax reminded me of two Telugu masterpieces "Geetanjali(Maniratnam)" and "Saagara Sangamam(K.Viswanath)".Southies can relate to it! 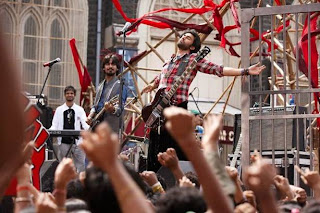 All said and done Rockstar is a must watch and I wouldn’t mind watching it again for Ranbir, Mohit, Rehman, breathtaking locations shown in the movie and last but not the least to watch Shammi kapoor and feel that he still lives. He plays shehnai in the movie resembling the real Ustaad Bismillah Khan and with his blue eyes and killing looks Shammi still looked like the most romantic man on the earth to me! Long live Shammi and hail Rockstar. I wish it bags many awards at all possible award ceremonies. Good luck to the Rockstar team. Right now plugged in to "Aur Ho"!

My Rating : ****(4 stars)
Can’t resist saying this one more time---Love you RanbirJ
PS: I took time to write and post this review as am tied up due to personal/professional things but as they say its never too late :). Am super glad I finally posted.
Planning to watch the movie again!!
- November 26, 2011 4 comments: