Turbo- "He is fast.They are furious!"-- Premiere experience

Watching animation movies has become a ritual now as my husband works with "Dreamworks". As we watched the "Crood's"premiere at the same theater we know before hand about the limited parking space and that mobiles won't be allowed inside. As we got late we got the last parking slot but we thanked our stars as we at least got a vacant spot to park the car! We got bad seats inside the theater but as it is a 3D movie and as we were given 3D glasses of good quality the position of seats didn't matter much later.

The movie started after the initial formalities like give aways, introductions and some prize distribution. Initially I felt I might be bored by the story line of the movie in which a snail wants to increase its pace and run a race and prove to his fellow mates that he can do something special but as the story and also the snail gained the pace my excitement increased too. Our protagonist snail is just a normal garden snail and lives with many other snails who have a mundane life which bores him to death. His brother tries putting full stop to his day dreaming but where there is a will there is a way. The movie holds a subtle moral like many animation movies that if you have a strong determination to do something then nothing or no one can stop you. To know how the snail gains speed and how it enters the Indianapolis race you need to go to theaters and watch it. As I watched the premiere show and as the movie is not released yet in India I don't want to reveal the story!
It's strange how the deeds of these animated characters fill more optimism in you than the words of few fellow humans which have a hint and a hidden intention of always bringing you down! The movie is short , crisp and clear. I felt like having a taco once the movie ended :) Humor is intact through out the movie and no time is wasted beating behind the bush. If I have to compare this with "The Croods" I would say I liked Croods more as it had more fun elements and roles. Nevertheless both are brilliantly made and "Turbo" is unique in its way. I tapped my feat at the song "That snail is fast." Its so cool.

My most favorite dialogue from the movie.
"What will you do if you lose your powers tomorrow?"
Turbo replies : "Then I will make the most of it today."

Hats off to the makers of the movie .For laymen its tough to even imagine flawless execution of such a simple idea. There's no drag in the movie and like all animation movies it doesn't get preachy at any juncture. Ryan Reynolds voiced Turbo and Samuel L. Jackson for whip lash - the snail leader . Three cheers to the director David Soren and I loved the music hence a special mention to Henry Jackman who gave the music. After watching the movie we had hyderabadi haleem in Bangalore at four seasons restaurant which soared our spirits :)

Watch the trailer below. Isn't Turbo cute ? I love the tag line - "He is fast. They are furious !"
Don't miss watching it in your nearest theatre from july 19th.


I clicked the below pic of a snail at Mysore on one of those rainy days. See how sluggish, sleepy and happy it is unlike Turbo :) 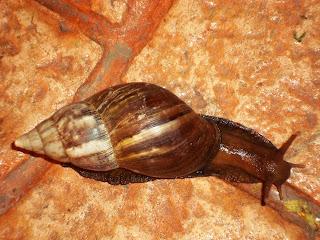