Drive to Nandi Hills -"A drop from the heaven!"

Early morning road trips need immense patience and effort as getting up early needs all your strength and on a weekend it is more challenging. Weekend is supposed to start late. Getting up at 12 , having brunch at 1 and tea at five is our daily routine but few weeks back we decided we have to get our lazy bums off the bed as Nandi hills is famous for its sunrise.

Nandi Hills or Nandidurg (Anglicised forms include Nandidrug and Nandydroog) is an ancient hill fortress of southern India, in the Chikkaballapur district of Karnataka state. It is located just 10 km from Chickballapur town and approximately 60 km from the city of Bangalore. The hills are nestled between the neighboring towns of Nandi, Muddenahalli, and Kanivenarayanapura. (Source : Wiki).

Morning was breezy and it started drizzling as soon as we started at our home in white field at about 5:30. The drive was extremely pleasant and I realized after long that early mornings are divine. Luckily as we stay in whitefield the drive was short though as a second thought I wanted it to be long. As the roads were clear and as cold waves waved a "hi" every now and then I wanted to have a longer drive to Nandi hills!

We clicked this on the way. This was actually the first click during the road trip. I loved the structure but was not able to recognize the name of the building. 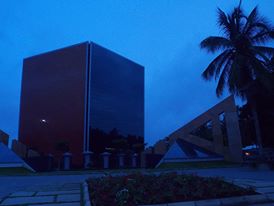 As we continued to drive we came across tall palm trees swaying in breeze. The clouds got denser and darker and it started getting more and more cold as we approached the hills. I realized at that moment that it would be tough to catch the sight of the sun. The thick blanket of fog covered the roads and hills. 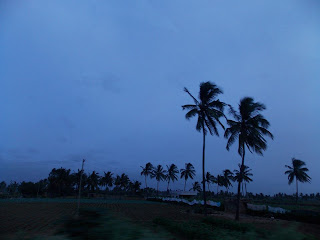 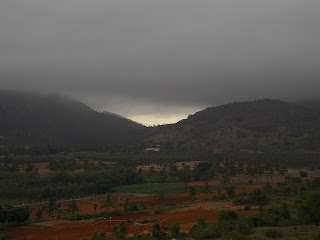 Driving on the zig zag path was tough and we left our car's head lights on to be safe. Our Renault Pulse was shining bright in all its glory. 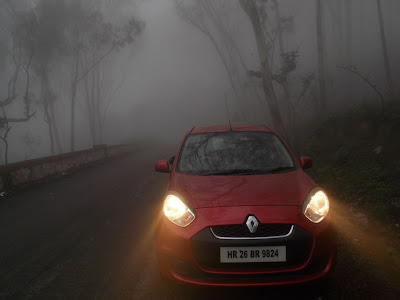 On the way we came across a group of monkeys huddled together so as to stay warm. Few were busy grooming and few were busy snatching the eatables from the visitor's hands. Few had the bored to death look as and when they saw the daily tourists! 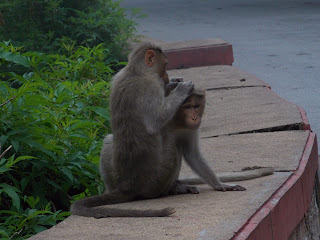 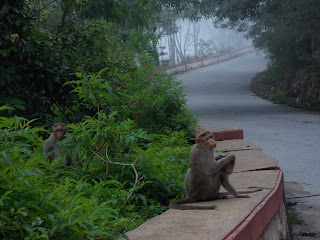 After clicking monkeys , clouds and trees I realized that I should give a chance to the man behind the wheel to be a part of the album. 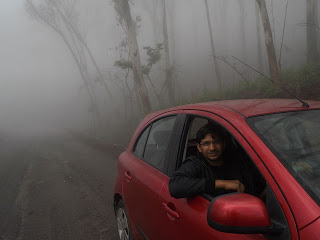 After capturing few magnificent snap shots using our NIKON L 810 we continued driving slowly as the fog was heavy and the vision got blurry. As and when we entered the main entrance there was a long queue for tickets and due to all the travelling in the cold dense fog there was a long queue even at the entrance of toilets! To my dismay I was the last in the toilet queue and my husband was the last one in the tickets queue ! There is no need to explain the worse condition of toilets. The mental image of any public toilet in India holds good. To my disgust I had to pay 5/- for the 30 seconds torture inside the bathroom . Phew!

To shed off the mental image and to again lull in the natures lap I took my phone and the camera for capturing some snaps at the entrance.


Once we bought the tickets we wasted no time as the fog might get lifted. We drove through the entrance to the park and the Nandi temple. At the entrance I found unusually tall Opuntia and Cactus plants. They are xerophytes( desert plants) with thorns and beautiful flowers. May be they loved the climate and responded happily by becoming gigantic.
Inside the gate it was more heavenly. The path sure felt like it was leading to heaven and Gods. 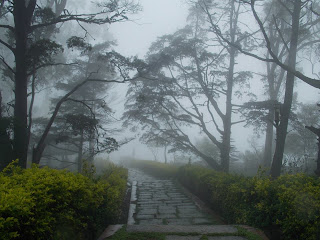 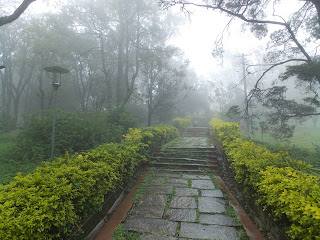 The view above brought the poet in me out and in no time I weaved the below lines and absolutely loved them.

"The path ways to heart are always foggy but we like to walk till we see the destination.

When the fog gets lifted and destination is near we are no longer interested to walk.


The path ways to heart are cob webbed but we move forward cutting each string.


When the path gets clear we get scared to move even an inch from where we stand!"

We parked our car at some point and walked up hill and down hill .We were too mesmerized to feel the sleeplessness. In fact we were more energetic once we breathed the pollution free air. I wanted to sit on those steps for eternity but as time will not halt I had to leave the spot to explore the area more! The benches submerged in the fog are an added attraction to Nandi hills. Where ever you go you will see the benches covered in mist! 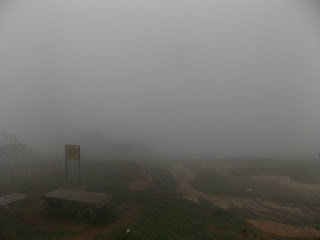 We spotted a white building which looked like a palace constructed in sky. I so wished I owned it. It was magnificent and was shining like a pearl. There was a Nandi near the porch which adorned the building. We could spot none hence did not know the significance of the building. We assumed it to be a resort or a club! 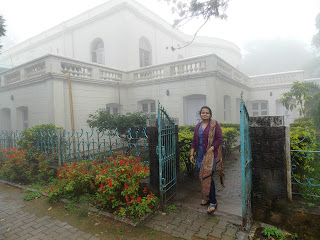 We strolled lazily and leisurely. The fog refused to lift off. It was heavenly and we couldn't spot sun. It started getting chilly as there were frequent drizzles. This reminded me many bollywood and tollywood movies, songs and specially the climax scenes shot some times in hill stations or in rain. After walking for a while and clicking hundreds of pics we came across a Nandi temple. I found a rose in full bloom there and immediately captured it. Sadly as and when I clicked it an elderly man in his mid 60s mercilessly plucked it :(. I glared at him. He must have got scared as he left tip toed.


We reached the highest point of Nandi Hills standing where one can see the canopy of fog covering the Bangalore city. Thats when I realized the secret behind the pleasance of the city! 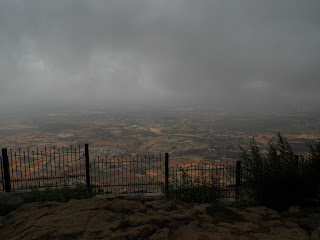 After the strolling and lazing out for more than an hour we remembered that we ate nothing since morning as our stomachs roared. We started towards the restaurant which we spotted on the way. It was flanked by monkeys who were all set to snatch what ever you are holding in your hands. From Araku valley to Manali to Malaysia I get scared of these monkeys on hills. Once I ran as fast as I can and covered some 300 steps at Batu caves , Malaysia in the shortest possible time which easily can be printed in the Limca book of records! After successfully saving ourselves from monkeys we went in and ordered hot dosa and veg pulav. It was a bliss to relish the food watching the fog, hills and trees. As we were eating a monkey hopped in with a speed of a light year and took away the left overs from a plate in the adjacent table!


After few more clicks and idling we had hot elaichi tea from a tea stall just out side the restaurant. It was extremely relieving as I felt dizzy due to my numb head. 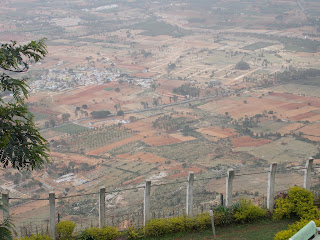 The drive back home was pleasant too but the fog got lifted and sun slowly started peeping out of the clouds. 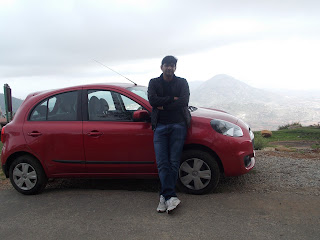 As soon as we reached home we crashed and had a sound sleep for two hours. This was the perfect road trip we had in Bangalore so far and it was a Sunday well spent when we realized waking up early in the morning all together gives a different perspective of the day. Such trips are good even in solitude but I had the best company which made me more peaceful and I absolutely relished the beauty of nature :)


This post is written for Indiblogger's "The Perfect Road Trip" contest in association with "Ambipur".

When you are here do visit Ambipur's face book page- "AmiPurIndia"