Meena bought a special oil worth 1000/- labelled "milkNwine". The oil promised to make hair long , strong , silky straight. Meena was scared for a while as she couldn't crack the logic behind the name milk and wine. She was puzzled thinking that the oil might smell like milk or her hair might turn to a  brownish shade of wine but Miss Catherine got rid of all her assumptions.

The beautician said milk, as it has milk proteins and wine as it has some wine extract and  kept ranting on how good the elements are for hair , how no one used this unique idea of using milk and wine and blah blahed for an hour till Meena got convinced. She bought the bottle home. She happily unscrewed the cap and started applying.

Initially the color of hair became dull . Meena thought may be it was happening in the process of hair straightening .She was flabbergasted checking her golden mane with a tinge of orange shade on day 15 and she lost lot of hair too during that fortnight. 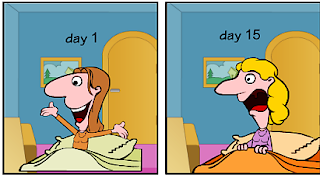 She immediately dialed the beautician's number but only got a response , "This number doesn't exist" . She got ready and rushed to the parlor and realized she was doomed when she saw a vacant , locked parlor. There were many standing outside and inquiring about the parlor and the product and few dialing the police stations number. Every one had a shiny golden mane which was neither straight nor thick. If they belonged to a pride (a group) of lions they would have looked royal but alas they were humans and still had to go to offices and colleges. They learnt a lesson that day and had spread the word about the cheater Miss.Catherine who carries a Shahnaz Hussain's fake certificate.

After a 2month duration Meena went to a renowned parlor to get her hair straightened. She was told she had to pay 8000 change to get straight hair and after a long torture of repeated cycles of gel application and ironing for 8-10 hours her hair became straight. It was like a dream come true. She flaunted her straight hair where ever she went, in parties , at office , in malls etc. She was a proud owner of silky straight hair now which can break the shining manes in ads which act like mirrors!

After 2 months her hair became bristled and they were standing in the ends. It was irritating to go to parlor and get her hair straightened every 4 months or 6 months after waiting in queue during every visit and spending a lot just for the sake of straight hair. She discontinued parlor visits!

Meena forgot about straightening her hair as she tried all possible techniques like ironing in parlors, temporary straighteners, special oils , creams and conditioners, so on so forth . She either lost her hair or it became life less like a broom stick. She was so depressed that she was not able to concentrate in office. She was neither able to eat nor do the day to day chores normally. One night as she was absorbed in her thoughts a hairy-fairy appeared in front of her and asked her a wish which couldn't be taken back !

Meena rubbed her eyes in shock but the scene infront of her was intact. The fairy with Rapunzel like long hair asked Meena for her one wish as soon as possible as she had to visit neighbor hood flat to give a hairy wish to one more troubled damsel.

Meena was too shocked to talk. Fairy spoke this time.

"I know your deepest desire. You want straight hair right ? " Saying so she raised her rosy delicate wrist which emitted stars and was about to place her palm on the bristled mane of Meena.

Meena stopped her mid-way and shouted, "Please give me my original hair back."

Fairy smiled and stroked Meena's hair gently and it turned light brown and silky and healthy like before. Immediately after that she vanished. Meena was extremely happy when she checked her reflection in the mirror. She felt that fairy gave an extra silky touch to her hair and she realized that her hair was straighter,  healthier , stronger and silkier than before. 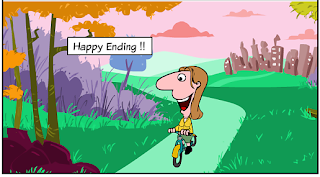 Moral of the story : When it comes to looks , hair and complexion stay content with what you have. If you desire for some thing badly try getting it but don't  do it by all means and do not be so hard on yourself till you get it !
PS: I drew the cartoons here with the help of the site toondoo.com. Fairy image is googled.

This post is for the competition by "Sunsilk"in association with "Indiblogger". My post is at "A hairy fairy story"