Cannot call it "The end of the Epic!"

Cannot call it "End of the Epic!!"- A tribute to Harry potter

The era of awesome movies ends. These are the words which first popped in my head after I watched Harry potter and the Deathly hallows—Part 2 in theater 2 years back. Finally there was a curtain raiser to the buzz, the goosies, the overwhelm and joy and also sorrow as there won’t be any more movies! The movie was grand throughout with a total 3D filming . It was an “aahaa” and an “Aargh” moment as well to me! The movie starts exactly where it ended in 7-1 and it doesn’t skip many details which is a delight to readers .There is no ambiguity even to those who watch only movies and don’t read books, but they altered few bits and pieces like they always do .Not sure why they do it but this time the changes were in sync with the movie. The movie doesn’t spoil the war spirit or the story line but as always the worshipers who follow book like bible ended up discussing and murmuring in theater that this is not in book or that part was shown in an unexpected way. For a moment I got a weird thought of casting “Muffliato” spell on the surrounding public so that we happily watch the movie. 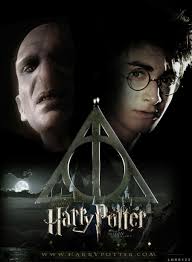 Few dialogues were just as expected and we actually sat at the edge of our seats and had goose bumps.  I enjoyed when Mc Gonagall says “Hogwarts is threatened! Man the boundaries. Protect your school”   and then all the armors come alive. My adrenaline rushed when the war started. Even the death of  Voldemort  is so convincingly shown .He loses strength every time a horcrux is destroyed. He slowly loses confidence. Reading is lot better but this bit was more good to watch live .When Hogwarts was being destroyed we audibly shouted “Oh No! Hogwarts is ruined.” I know the mere muggles may call the fans freaks the way Petunia calls Lily but it’s tough to understand the emotional attachment with this magic woven by Rowling from more than two decades. When they show Hogwarts as just rubble I felt they should just show a scene from future in the end where again HOGWARTS rises to life and there would be abundant snow fall during the  December Christmas! I just wanted to see a happy school again with the trio sitting in Hogsmeade enjoying a butter beer. 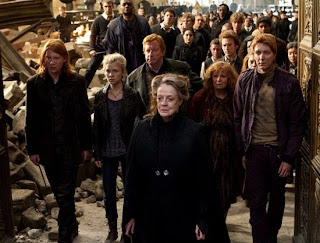 The trio as always rocked. Snape/Alan Rickman is heart of the book and also the movie. A stern Person who seems to be loathing Harry all the way melts down to a man who loved Lily Evans potter throughout his life and the same reason his patronus is also the same shape as that of Lily’s which is a silver doe is a touching fact for the readers and movie watchers! ! The only deficit I felt is Snape’s story should have been a more detailed one. The movie should have been a bit longer as it  was the last one. When we feel magic around who wants it less? The KingsCross episode is too good! It is short and crisp without much confusion.

My favorite dialogues from the movie:
Harry: “One last question professor. Is this real or is it just happening in my head?”
Dumbledore: “Of course it’s happening in your head but why should it mean it’s not real?”

This is just before Harry comes back from KingsCross!The only things which were silly were Dark lord's silly victorious laugh which didn’t come out great. Everyone laughed in theatre at that juncture. Bellatrix is shattered to pieces. She should have just died like in the book. Again this will solely be a book reader’s reaction. Voldemort hugging Draco is weird as Voldy loathes Malfoy’s family throughout. Other than these things rest of the movie is as adorable as always and a PERFECT potter movie so far! The scene after 19 years is also beautiful except that Hermione didn’t age much, but she is an ingenious witch so I thought to myself that she must have done something to herself like having a homemade under age potion to stay young!  Ginny was so graceful and Malfoy who goes through lot of emotional turmoil looks natural too. The end was nice with the off springs again boarding the train at 9 ¾ at least giving a relief to the fans that the saga is continuing…

The cult so deeply imbibed in our nerves and running in the blood cannot end but the fact that there won’t be any waiting in July after Deathly Hallows made me feel bad for sure! The magic of this epic is for life time to me! Just when I was getting disappointed I saw this link and it was like the dementors sucking the magic out of me vanished all of a sudden .It felt so good to read this- http://www.buzzfeed.com/ellievhall/28-things-that-happened-after-the-harry-potter-books-ended

The only spell with which Rowling won so many hearts is that “Even if you are ingenious and know the darkest possible magic you cannot win if you cannot love any and have evil deeds in your mind. Love has greater magical powers!” This single mantra won the readers’ and audiences’ hearts all these years!!
I was “Petrificus totalus” when the movie ended and even after the end titles we were transfixed to seats for a while!
Some memorable quotes from the movies and books:

§  It does not do to dwell on dreams and forget to live, remember that.  ~J.K. Rowling, "The Mirror of Erised," Harry Potter and the Sorcerer's Stone, 1997, spoken by the character Albus Dumbledore

§  Never trust anything that can think for itself if you can't see where it keeps its brain.  ~J.K. Rowling, "Dobby's Reward," Harry Potter and the Chamber of Secrets, 1999, spoken by the character Arthur Weasley(My most fav)

§  Happiness can be found, even in the darkest of times, if one only remembers to turn on the light.  ~Steven Kloves (screenplay), Harry Potter and the Prisoner of Azkaban, 2004, spoken by the character Albus Dumbledore

§  It's a strange thing, but when you are dreading something, and would give anything to slow down time, it has a disobliging habit of speeding up.  ~J.K. Rowling, "The Hungarian Horntail," Harry Potter and the Goblet of Fire, 2000

§  If you want to know what a man's like, take a good look at how he treats his inferiors, not his equals.  ~J.K. Rowling, "Padfoot Returns," Harry Potter and the Goblet of Fire, 2000, spoken by the character Sirius Black.

§  Numbing the pain for a while will make it worse when you finally feel it.  ~J.K. Rowling, "The Parting of the Ways," Harry Potter and the Goblet of Fire, 2000, spoken by the character Albus Dumbledore.

§  You place too much importance... on the so-called purity of blood!  You fail to recognize that it matters not what someone is born, but what they grow to be!  ~J.K. Rowling, "The Parting of the Ways," Harry Potter and the Goblet of Fire, 2000, spoken by the character Albus Dumbledore

§  It is a curious thing, Harry, but perhaps those who are best suited to power are those who have never sought it.  Those who, like you, have leadership thrust upon them, and take up the mantle because they must, and find to their own surprise that they wear it well.  ~J.K. Rowling, "King's Cross," Harry Potter and the Deathly Hallows, 2007, spoken by the character Albus Dumbledore
- August 19, 2013