"The Croods" Premiere experience and review

It was not just the free pop corn , coke or the mouth watering chocolates distributed just before the show started or the red carpet adorned by many bubbling enthusiasts, pretty damsels that made the day special. "The croods" premiere show was special as the experience of watching the movie along with those who actually were a part of the team responsible for the excellent output was new and pretty exciting. My husband works with "Dreamworks" and among the benefits of working at a creative place with creative folks one is getting free passes for the premiere show of "The Croods" in India.

I was more excited as my mom ,dad and bro visited us at the right time and were able to make it to the show! We all geared up to reach  the "Urvashi" theater at Lal Bagh on time. We were invited with many warm smiles , a bunch of chocolates , hot pop corn and coke! The theater was jam packed with all the employees , their kids , friends, relatives and many creative people . We munched buckets of pop corn and discussed the movie's who's who. I was excited when I knew that Nicolas Cage voiced for Grug. For those who don't know ,The Croods is a 2013 American 3D computer-animated adventure comedy film produced by DreamWorks Animation and distributed by 20th Century Fox. It features the voices of  Nicolas Cage, Ryan Reynolds, Emma Stone, Catherine Keener, Clark Duke, and Cloris Leachman ! 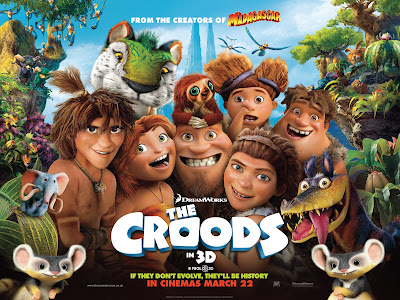 As I don't know much about the movie I was hoping it to not be a bore but expect the unexpected I enjoyed it so much that I clapped unintentionally at certain point in the movie. The opening scene itself will captivate you when the survival of the fittest is shown in a simple yet meaningful style and  the  "end of the world " is mentioned little later by "the Guy"! The croods are always the proud survivors who are cavemen who practically live in forest among other animals and behave more like them and less like humans ! The father Grug (Nicolas Cage) thinks that it is his strength and over protective nature that helped his family to live a normal life every day much to the depression of Eep (Emma Stone)  his elder daughter . The father daily narrates bed time stories which end in death and despair if guidelines and the parents' foot steps are ignored. The family includes Grug's wife Ugga (Catherine Keener), his daughter Sandy (Randy Thom), son Thunk (Clark Duke) and his mother-in-law (Cloris Leachman) . They are tuned to the robotic mode of life and behave like machines which are given commands. When others monotonously obey Grug's rules Eep the most adventurous and curious of all pays deaf ear to her dad's continuous warnings that curiosity kills the cat and escapes from the cave exploring the direction lit by a flame torch . She meets the Guy (Ryan Reynolds) and his 'pet' sloth, Belt (Chris Sanders), She falls for his intelligence almost instantly.

The rest of the story is about how Guy guides them to a safe zone and how well he explains to the Croods family that safety doesn't mean to sit in a dark cave . It means to explore the world and see a "tomorrow'. Grug remains rigid and continues his stories with sad-end. In the end when every one is impressed by the guy , his positivity and the hope to live a better life Grug gets extremely jealous and tries hard to imitate the guy but fails big time! Slowly they bond and together they all venture out to a new tomorrow! Grug saves every one using his brilliant ideas and saves him self just in time which leads to a happy ending unlike his stories !

I have always been a fan of animation movies made by dream works be it Kungfu Panda , Shrek, Puss in boots or Madagascar . Any animated movie is not just for kids. They have a subtle moral which is unfolded in such a simple and sweet manner that you cant help but love the movie. My mom dad who never actually enjoy the animations enjoyed "The croods" experience due to many human emotions embedded in it , the sensitivities , the father-daughter bonding which actually is touchy when Eep blows horn so that her father will hear and come back to them!
The hope which never dies is shown very beautifully in the movie. My mom is all set to watch "The Shrek" series now :)

Quotes from the book and the movie:
There are many more quotes worth mentioning but it would be great if you watch the movie and enjoy the adventurous roller coaster ride and revive your faith in happy endings! I have no knowledge of technical skills or glitches but all I want to say is the 3d effects are stupendous and the expressions flawless and every scene captured in the forest and all the animals are lively. All beautiful landscapes at which Eep gapes and exclaims "You really need to see this" are absolutely gorgeous ! If you are a positive person you will love the movie in and out and if you are a negative person I prescribe this movie to you this instant.

Go live with the croods family for some 98 min and get rejuvenated. The belt and Sandy say "Ta Ta Taaaa" in the end which will make you all giggle !!

Good luck to Dreamworks folks for their next movie Turbo and  I wish all the success to "The croods" team. The below news actually is the happy beginning-
"Croods at box office"

Croods truly is like an animated "Avatar" . Do check this site. Its fun -http://www.thecroodsmovie.com/

Some thing which I felt like an icing on the cake is "The croods" association with "The makers of Angry birds" (Rovio). The below special click by me is dedicated to this association as I immensely love AngryBirds too.  The Croods game is available on App store "here"!

A glimpse of "Croods"

PS: I have copied the movie images from google and few links from Wikipedia and IMDB
- March 27, 2013