Fukrey – I didn’t know the meaning of the word till I went to watch the movie. No one told me what it meant but I realized it just means people who are good for nothing. I went to the movie on a weekday just for 100/- a ticket to a multiplex and I must say it is a total Paisa Vasool movie.  The movie stars Dileep aka Choocha (Varun sharma ), Hunny (Pulkit Samrat ), Laali (Manjot Singh) and Zafar( Ali Faizal) as Fukras and Richa Chadda as Boli Punjaban. Other than Zafar whose role is slightly dim all others are top notch performers. Zafar plays a music genius who is struggling to prove himself and suddenly faces financial crisis due to his paralyzed dad.  Varun Sharma is a promising debut and has a long way to go. Pulkit Samrat is smart and can tickle your funny bone anytime. After Bitto boss a movie which didn’t fare well this movie sure gave him a chance to project his acting skills. Manjot Singh is a natural.  The girls don’t have a prominent role but are not wasted. Priya Anand is apt for the role and ambarsariya song just beautifies the sparks flying between Hunny and Priya. Neetu played by Visakha Singh is Zafar’s girlfriend and Laali’s tutor. Music by RamSampath suited the story.
The story revolves around four guys whose sole ambition is to earn money by hook or by crook. Each has his own problem to solve for which he is badly in need of money. From the first scene you will be rolling on the floor laughing due to the silly, slapstick humor which sometimes makes you think about your student life and the unlimited fun you used to have if you are not a student now.  The story is set in Delhi. Though authentic Delhi is not shown much the director succeeded in showing what he wanted to. The students , tender age , infatuations , ambitions , friends and the attitude to do or die for them is all woven beautifully around a string of humor. Humor is strength of the movie which keeps you glued to the screen and increases your interest in the plot.  The movie reminded me Kamal Hasan’s Pushpak at few junctures. Especially the role of the beggar is similar to a role in that movie! I even remembered a Telugu movie “money” where there is run and chase due to the desire for money. One can see the Delhi-bellyish kind of atmosphere at few junctures but honestly I felt this one is better with more humor.  The youth factor and the enjoyable humor definitely make Fukrey a fresh cake out of the oven.
Varun Sharma is a laugh riot. The moment he opens his mouth and starts narrating the tall tales and his desires to get a woman at any cost in life will make you split your sides.  Pulkit complements Varun and the duo together gives you a laughter therapy! One more character which has to me mentioned is Pandit ji at college played by Pankat Tripathi who also acted in Gangs of Wasseypur. His one liners and punches are also LOL worthy. You feel that story is losing its pace when Boli Punjaban enters the screen and sets it on fire. She not only handles but also masters all the illegal ways of earning money. Post intermission it’s all run and chase with humor intact. Richa Chadda is the best choice for the role and she lives up to it. Her energy and tongue scares the shit out of people and her interactions with Varun are funny too.  Varun, Manjot singh and Pulkit possess the skills to get promising roles in future too. 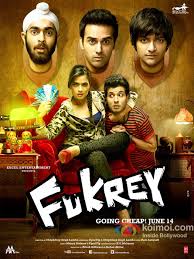 To know how Choocha’s dreams actually have the power to make them rich and to know  how the chase ends and whether they earn the money or not you have to go to theatre and laugh till your tummy hurts. In midst of comedy films where one has to tickle oneself to laugh Fukrey is a pleasant surprise and there’s nothing really cheap in the movie. Music is peppy and soft too. If ambarsariya is soul ful, jugaad and fukrey make you tap your feet. This movie is for those who don’t want to find logic in every snippet and laugh heartily. Fukrey will totally make your day colorful.
My rating: 3.5/5

The below song - Karle Jugaad karle is creatively shot :)