The beautiful and Controversial Tajmahal

What Can I say about her. The day I first saw her somewhere in March 2010 I was awestruck looking at how precisely she was made. It was hard to believe that humans made it !Its tough to see such beauty being designed these days. The precision , the symmetry , carvings, the love , devotion were all reflecting in her nooks , corners and crannies! I gape at her, marvel at her magnificency and admire her endlessly. To me Tajmahal is definitely a symbol of love.
The varying  comments of  the researchers , travelers and onlookers do not flinch me coz I can see the love and devotion  in every brick and design!No body will allot 20+ years to make this marvellous structure if there is no love for whom it was made. 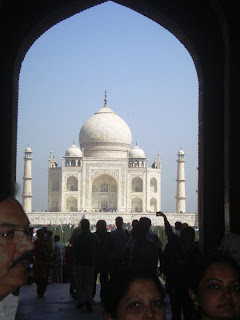 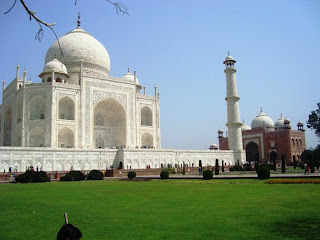 A side of the beauty along with one of its gates (in red) right to her.


I am writing this article due to surge of emails I always get with subject "Is Tajmahal a real symbol of Love?"
Few supposed to be facts about Shahjahan originally named as Prince Khurram, son of Jahangir and grandson of Akbar (to know more go to-> http://en.wikipedia.org/wiki/Shahjahan) are quite alarming, like he slept with his daughter Jashanara (according to one site) or he had "5000" harems in court and he just played with them and Shahjahan's sole motto in life was to sleep with as many women as possible. I dont remember the URL of the site in that mail but I can see the loathe and venom in each and every line as some where it is also written that like many muslims his sole motto was also to nail as many women as possible and be polygamous. I then realised I cant trust this site much as it was targeting the whole Muslim community along with the brutality and ruthlessness of the king. I know that history and the royal desires and their lives are quite interesting as well as disturbing but a man whose sole purpose is sex can never expand the kingdom or make it rich !Some sites say the love towards Mumtajmahal originally called as Arjumand Banu Begum (To know more refer http://en.wikipedia.org/wiki/Mumtaz_Mahal) is bull and the Taj mahal being built out of love is crap. Rabindranath Tagore describes in his poem - TAJ MAHAL is like the tear drops of Shahjahan! The site says Rabindranath never knew the facts so he wrote like that and it is actually built to berate hindus on top of Shiva temple. I read some where that govt took all the measures and hence the severe security so as another Ayodhya- Babri doesnt happen ! 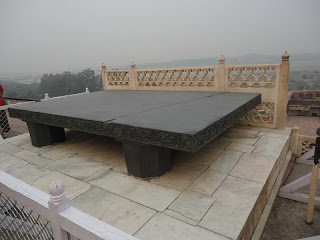 shahjahan's throne in the fort. The crack is due to the Britishers attack as per the guide

Now any excavation will lead to another one buried below and the religion / caste disparities were there from times immemorial hence I have nothing to say here than praying that people dont go and destroy Tajmahal !

Most of the sites say Shahjahan was all gloomy for more than an year after her death and was imprisoned by his own son Aurangazeb and he spent last living years in the prison with white-grey beard , a frail look watching Taj mahal from the fort. You can visualise this when you visit that prison , his throne and the Taj- View point in the fort.

The king must have been polygamous and am not sure about the horrendous things some historians state like he slept with all possible women. May be he was brutal and his secret as well as open affairs were unacceptable but that was how it was during many Badshahs' reign. I used to watch Jhansi ki rani starring  the stunning Varsha usgavkar when in school and in that her husband is shown as a womenizer(Its argued he is homosexual in some sites and that he has many mistresses in the other).Now am not sure of the facts. No body used to say no to the royal commands and that was how life was in those days.Ultimately she leaves the palace to go the warfront. Every one knows her valor where she carries her adopted kid on her back while fighting!

A lot has been told about Mumtaj-Shahjahan's love episodes too like she was the only one whom he passionately loved and that the rest of the two wives were just for name sake and he dutifully gave them an offspring but his true love was mumtaj mahal whom he liked since she was 14 and got married after 5 years the event which was disliked by his mom Noorjahan another beautiful queen and wife of Jahangir !Shahjahan himself named her MUMTAJMAHAL (which means the official queen of the palace.) Am sure if there is no love at all , none would do it !There is also a belief that the king wanted a black tajmahal tomb for himself to be constructed just opposite to the white one. There are no solid proofs even on this! 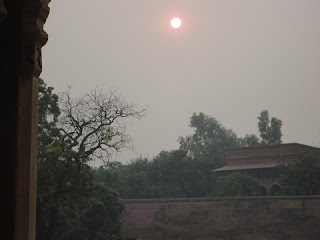 Sunset from the fort- The shahi Sunset :) 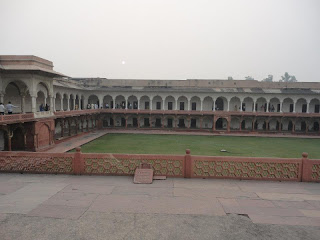 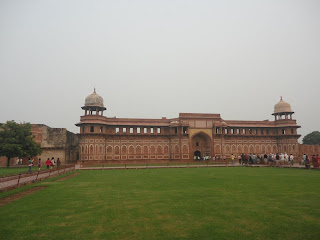 Coming to the polygamy style of the king or the way he treated women - Am not supporting it . I quite hate those aspects but am saying there were too many kings who followed the similar life style. This lifestyle will lead to too many raised hands and heated arguments questioning the authenticity of Shahjahan's love !?

Even I get the doubt if he really loved Mumtaz , but looking at the tomb I always get the answer that he must have really favorited her  among all wives and passionately loved her, hence so much devotion while building a mere tomb that it became one of the seven wonders of the world and it deserves to be one ! Its northern , eastern , western gates  the garden and its symmetry - the way it looks same from any side and also the way the persian / Arabic letters are all of same length from top to bottom all feels magical. I some times feel like its straight away dropped from heaven to earth! No wonder it took 20 years and the myth that the workers hands were cut also has no proof but its always discussed that they were never allowed to work for any other king or anyone as Mumtaz requested Shahjahan that hers should be the one and only one tomb which is exclusive and hence it was made with so much precision that making a replica is almost impossible!

Coming to the love towards mumtaz being real or not you should visit Tajmahal and decide for yourself.

Shahjahan indeed fulfilled her last request and its so unique that people all over the world rush in crowds to watch it , to get a photograph on the VIP seat in front of the mausoleum!
Shahjahan as claimed by many might be the bad king but he gave jobs to 100s / 1000s of people in and around the Tajmahal in AGRA. He would not have dreamt that this tomb would become a livelihood for many . People crave to watch her grave and feel great!

Keeping aside the facts and myths the fact is not a nonsense that Mughals did contribute a lot to the Indian architecture by their amazing forts and monuments- Be it Agra fort , red fort , Fathepursikri , Taj mahal , sikandra and other Tombs in Delhi. Many movies are short in various spots and they attract tourists through out the world. 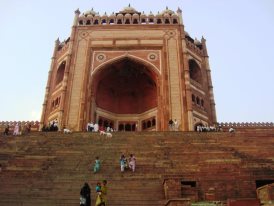 I want to end this article with a beautiful pic of Taj which I took two days back. The foggy view makes us feel it is god sent ! 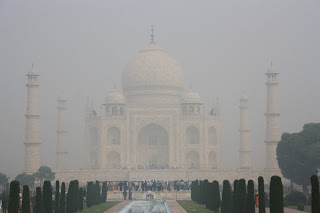 Foggy heavenly tajmahal. The fog/myst around it as mystic as she herself with all the myths, beliefs/legends! 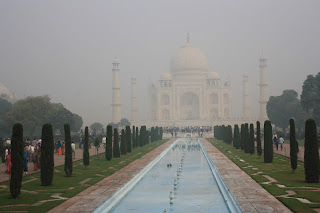 A poem after the over whelm of the TAJ visit
Time doesn’t kill emotions.Time doesn’t halt love.Once it is gauged and judged it is not love.It is the flower which blooms and never withers!
In ♥ again and always with Tajmahal - Indeed a symbol of love 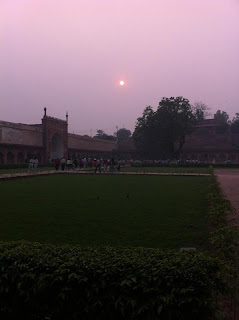 All the facts and myths make this the most intriguing , interesting and mysterious monument. If you havent visited Tajmahal yet do plan it and if you already visited , visit again . I assure you wont regret it :)

Khudahafeez with my fav of all songs shot at Tajmahal