A Trip to the "Lion City"- > Singapura

I am writing this after a long break. Hence will be taking my own sweet time as I lost track of details :( This post is continued from Malaysia Trip .

We started for Singapore in a starmart bus on the 4th day morning as per our Itenary .Had tasteless south Indian breakfast early in the morning in one of the restaurants of First world! Lack of proper food and lot of roaming around made me feel little sick and Migraine attacked me the night before and I was feeling bad thinking I may not enjoy Singapore. The luxurious comfortable bus with massage chairs which were as spacious as couches relieved me and I stared out of the window at rain droplets as we moved on. I switched on the massager and felt heavenly. Rain, the bus , clouds and hills . Didnt feel like wishing any thing else in life ! 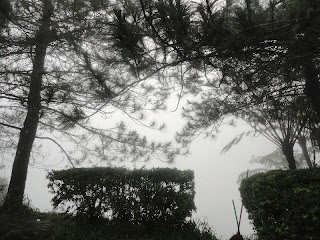 Singapore is at the Southern tip of the Malay Peninsula . We reached Singapore in no time. It took 2 and 1/2 hrs precisely but the drive was so heavenly that we didnt realise how much time it took. Made some Indian friends in the bus among whom one exclaimed that her Chachi's daughter looks exactly like me. Where ever you go in the world it always feels good to see intervening Indians :) It feels like home!

Our hotel FORTUNA was in Mustafa Center .  As and when we checked in we tossed luggage in the room and hunted for a Indian hotel in Mustafa. Food is  very expensive. We had Hyd Biryani (which was not exactly Hyderabadi) on which we spent 700-800 Indian Rupees .I was not tracking expenses as I was too tired but remembered to get  the dollar conversion  done as soon as we entered Mustafa . One dollar == 39 INR it was. We were offered free paapads with green chutney which I munched on rest lessly as If I just arrived from a drought area ! Post lunch we went exploring the Mustafa center as we were on our own for that half day. We roamed around electronic shops, Some local goodies , clothings , were happy to see sarwana bhavan and anand bhavan hotels of Delhi there. Mustafa was totally INDIA. Its lot better than the Little India of Malaysia! 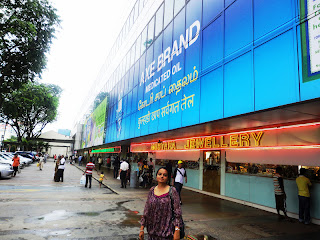 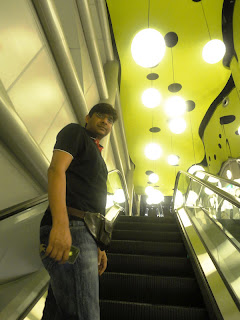 After some window shopping we decided we will discuss on buying a Sony/Samsung LCD TV(32 inch) as those were at the cheapest possible prices one can pay. Next day morning our cab was waiting outside the hotel and we rushed after gobbling some upma and drinking some cold tea (Tea which cooled down). The cab driver kept on boasting about Singapore and the life and how fast every thing progresses there unlike India . He showed us the "KRRISH" building. Building where Hrithik jumps in Krrish but as stopping there was not allowed we took Pics from the moving Cab!
. The driver Mohammad/ Mehmood , I dont exactly remember his name succeded to irritate me in 15min. Unlike the Christopher of Malaysia this guy I guess was born and brought up in Singapore so he doesnt know how much India progressed or changed. When he showed  MLCP (multi level car parking) and told - You wouldnt have seen this in India Imran in a high pitched voice shouted that there are 100s of these in Gurgaon and 100s of such malls too. I too shouted ,  "we have MLCP in our office" . He said "Oh ! Is it . Good . Good!" Thank heavens he didnt brag about INDIA not being sophisticated after that .
I remembered a comedy movie in Telugu (Manmadhudu) where Brahmanandam behaves similarly saying "PARIS is like INDIA fast forwarded for 50 years " and learns a lesson later when a thief steals all their bags :D :D Its  a ROFL scene and I was controlling my laughter when ever Mehmood spoke. He showed the clear roads and said - " You wont find any beggar here like in India. Clean Roads . No beggar. " I wished the coffee which he was drinking from a plastic cover using a straw spills on him !It was odd to see the plastic cover and straw. I didnt see any where this unique style of tea/ coffee. Imran asked him - "Is this the way you drink coffee here. He proudly nodded and then said, "Some of the Indians say its bad."

Then we quipped in chorus, "Its extremely bad . Anything in plastic may lead to cancer and its not hygenic. In our country we never drink a tea if it gets cold." :P He thought to be silent for the rest of the drive other than just guiding and mentioning the history and importance of few places. He then took us to some memorial built in the memory of warriors which was not that fascinating . Just a tall tower with names engraved on it. We just took photos around and entered the cab in 10min.

Our next stop was "Merilion park" . Its name combines "mer" meaning the sea and "lion". The fish body represents Singapore's origin as a fishing village when it was called Temasek, which means "sea town" in Javanese. The lion head represents Singapore's original name — Singapura — meaning "lion city" or "kota singa". To know more go to http://en.wikipedia.org/wiki/Merlion . Actually Merilion Park has a great view in the night but due to lack of time , as we have only one and half day for Singapore as per Itenary we had to wind it off in the morning .
Merilion park (night view)- This image made me tad sad when I saw in friends' albums. The below one is googled.

So, we cursed our travel agent  and Mehmood for giving us stipulated time where ever we went and got down to enjoy Merilion!

We took many photos in different angles in and around the mysterious Merilion - which felt like the heart and pride of Singapore City ! History of how the city evolved is fascinating . You may want to google and know if interested. We were happy at Merilion and spent more time than the alloted minutes to us :) and our next stop was a Chinese Buddha temple which I loved but shall discuss in my next post soon.  Theres not much left as we spent  very less time in Singapore but theres some thing important and beautiful to discuss in the next post :) Hence taking a breakTill then C ya!