The day started with less spirits as the journey was long and tiresome in the bus from Hyd to Mysore then all the way to COORG!!:) To Mysore it was roughly one night journey with two disgusting movies in the AIRAVAT of Karnataka!I always feel irritated by the schedule of the boring movies they play in the buses.Shaadi No:1 and Ek duje ke liye made me YAWN but couldn’t sleep coz of the hell lot of disturbance!!I didn’t get how two people can love so much so filmily even in a film !! then the tragic death they meet by the end of the movie :(!!The journey was half fun half boring .The session of the movies ended with Om Shanti Om in the morning till bus halted at Mysore with a small Intermission late night for rest:(.We halted at the dairy guest house to freshen up and do some shopping in Mysore before we start for Coorg! Was sleepy coz of journey the night before.Had to wait at the Mysore Diary when Papa went to meet his friend there reviving all the memories of his Old office which made him active but parallely made me sleep coz of long waiting !Finally Dad was back after a coffee and chitc 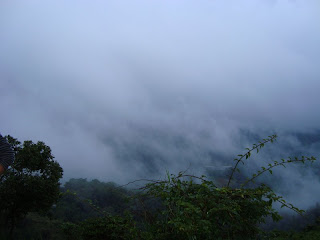 hat with his buddy.We had Lunch at a famous restaurant in Mysore in a stereotypic Carnatic style with a paapad,dal,poori,Achaar curry ghee sambar and what not..It was Yummy!! and heavyyy!Leaving Mysore with out purchasing a Mysore Silk Saree is insulting the city.Mom bought one and gifted me one (though I would be rarely wearing it!!Saree the most b’ful and most uncomfortable dress of INDIA ;-)!)We started for Coorg which is a hill station a district 120 KMS from Mysore in a BUS! The journey wasn’t up to the mark of my imaginations as myself and my bro were disappointed by the hot climate out !Had an Ice candy on the way which relaxed me a bit.We were chit chatting loudly and weren’t aware when we touched the borders of coorg! The COOL breeze and dense Greenery on both sides of the road invited us to a new world! which was so inviting that we forgot what was our topic of conversation.Sat silent and enjoyed the climate ..with situational songs being played like ruth aagai re ruth chagai re :) which filled high spirits among all of us.Cool breeze cloudy sky and occasional drizzle all in all was awesome!The dense forests and the familiar forest sounds like birds chirping and some strange sort of sounds finally made me feel WE ARE THERE IN COORG! Kushalnagar was more of a forest Area with the B’ful HAARANGI DAM where we stayed through out the trip in the middle of the forest in a guest house!Madikeri----HeadQuarters of Coorg is a beautiful town situated at a high altitude and all the houses there were scattered here and there at different levels of altitude as if in a Amphitheatre :-)!All the way we were capturing all the beautiful spots we came across with our diggy cam!We rarely get vegetarian food in Coorg! The place being so cool people there prefer having NV food and HOT DRINKS !Was bored to death with the intake of nonveg.By the end of the trip I was craving for my favourite Aloo khurma and Bhendi Fry( made by mom!)
The first day we entirely spent in the journey and getting settled in the guest house at Kushal Nagar!The first place we visited the next day was TalaCauvery the birth place of cauvery river in side a temple (Of which god am not sure)but a very B'ful place which got imprinted in my BRAIN!As soon as we entered the place which was some 3500ft high to the madekeri town .The morning heat was strong enough to activate the sebacious glands(oil glands! in Laymans terms)We were wondering how come at such an altitude we were sweating!!All of a sudden surroundings became chilly with cool breeze and sudden clouds drifting our way :)I felt as if there was some Solar Eclipse looking at the sudden darkness!Fog filled the entire place as if some one has sprayed it using enormous sprayers! Nothing was visible for 5--10min!!and the lonely benches with lamp posts covered in the dense fog made me feel I entered some FAIRY LAND a fascinating world which i always wanted to visit!!With mild sun the fog got showered as drizzle!and the cycle of sun--fog--drizzle continued for some more time.I climbed up 350 steps for a better view down the valley and was panting hard by the time I climbed down the same steps a total 700!!Purchased the famous Coorg Coffee and Honey on our way back from TalaCauvery!The place is famous for tea coffee plantations obviously being at such a high altitude. Visited same old historical places like TOMBS of some RAJA and blah blah!! as a part of the trip to cover all the spots, our Driver explaining the significance of each and every spot!
The below pic shows the peak point of Tala cauvery 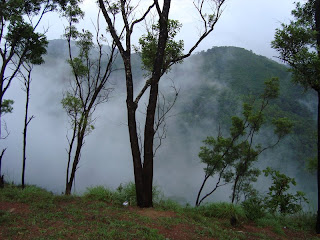 A Hindu Raja some VeeraRajendras tomb who was killed by Tipusultan is still worshipped by few local people!The evening view and sunset of Madikeri seen from RajaSeat(THE MOST WONDERFUL view point)is just speechless.The fog,different kind of flowers(esp: white lillies),the deep down valley and the sun set was an UNBEATABLE COMBO!Kings way was the only restaurant at KushalNagar where we found that food is good enough (digestable i can say with less oil and good taste :)) 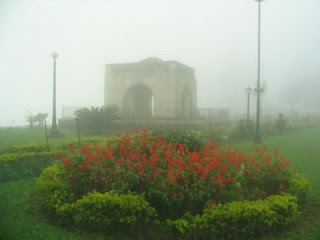 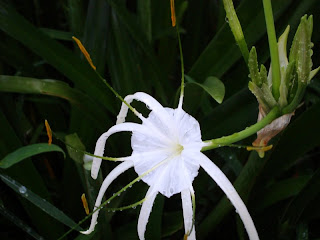 I was awestruck by the hospitality of the town people there.The way they treat the tourists as guests and the kind heart they have which is missing among the crowded cities these days!A place is finally decided as good better or best by the crowd there!Geographically whatever may be the intensity of the beauty of the place!Even in this aspect I can give full marks to Coorg in making us feel at home!ABBY waterfalls---One more Superb spot where i felt like sp 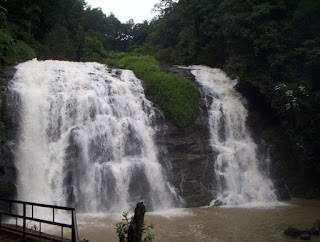 ending the whole evening but had to leave coz of time constraint!Falls were less dense with not much rainfall at this period of year but were beautiful enough to arrest our eyes!Had a strong coffee on the way back from falls which added extra energy:)700 steps at TalaCauvery jammed my legs.Still I was moving in a trans as if in a dream.Fascinated by the beauty of Coorg...forgot the leg sprain completely!

The next day was more exciting at the forests of Dubare with elephants and rafting though i didnt experience rafting!Only my bro did(Ithought better luck next time with 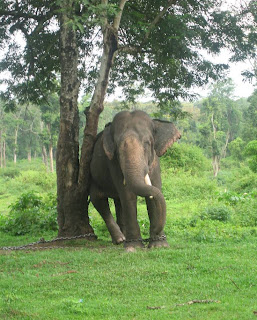 friends:))The experience of sitting on the rocks in the midst of a high current Cauvery river was mind blowing though faced Mama's taunts now and then "Not to go too far"!By afternoon around 12:30 there was a heavy current of water may be coz of rains up the hills was my guess;-)There used to be 6 elephants but as 4 of them have disappeared in to the forest!the elephant rider's business was heavily effected with less customers per day.All in all it was a cooland green(Not to be mentioned again but still!!)experience on the banks of Cauvery river.We visited a dense bamboo park where the cottages, shops every thing was constructed with bamboo..A deer park and a strong rope way are worth mentioning there.
Our final destination in COORG was the "GOLDEN TEMPLE" a place for Buddhist Monks! among who there were priests and even students who came all the way from Tibet to study buddhism to India!The architecture of the temple and their prayers with loud music were very new to me!They write some thing in the memory of the dead people and priests on some 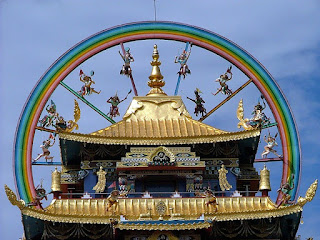 silk clothes which are tied outside the temple to the trees!Purchased a beautiful bag,bracelet and the chiming metal bells from the Tibetian stalls there.The bell is believed to be a strong LUCKY CHARM in Tibet.If I keep aside this LUCK FACTOR the sole reason I purchased it is "It was soooo damn cute!:)"
By evening as I started realising the trip was about to end I already felt sick and remembered the leg pain bothering me from the past 2days;)The same old office when I am back to Hyderabad and the same old work and the rush on the roads...traffic jams ...Pollution filled journey blurred my mind and made me weak.I even got a wild idea of getting settled in that place making coffee&Honey business as my occupation(exporting them to other places!)As all this is just a whim ...after having hot and tasty pakoda and tea at a near by hotel and the last supper at Coorg which had Chicken Shorba and a tasty Rasam made by our guest house cook KrishnaMurthy(who proudly said he is 35yrs experienced in cooking!)and sleeping soundly that night, packed our luggages the very next morning to start to Bangalore !!:(

The moment I was leaving COORG I promised to myself "I will come back"!Halted at Mysore for the afternoon food and started to Bangalore to catch the flight for the return journey!which was adventurous enough as we reached the wrong airport (old one)coz of the wrong information given by my papas DOST!!(grrr!)We reached Devanahalli(new airport)just in time passing all the polluted roads , crowds,dirty traffic signals of the "Garden city" (each signal on average was for 5min:().Taking wrong roads now and then ..getting more and more late and requesting the Indigo people that we are almost at airport (Which was a waste trial)!We finally reached the airport at 7:15 while the flight is at 7:30.Ran like mad in to the airport and were relieved when we were informed "flight is delayed by 25min"!! uffff....so the heavenly TRIP ended with a hell lotta tension in Bengalaru!which reminded me Coorg more n more!Finally reached Hyderabad at about 8:45 PM sharp (Less than half of the time spent on Bengalooru ROADS ;-))!
As soon as i landed on Hyderabad the immediate thing i realised was "OMMMI GODD MY LEGS are PAINING LIKE HELL"!!but nothing can be a reason now to take rest at home..HAD TO GO TO OFFICE with heavy heart filled with all the light cloud like cool memories of coorg!Shared the snaps among all the Friends,the memories lingering afresh in my mind..."HATS OFF" to the COOL--COORG :)
--------By Afshan--------------------

submitted as part of Indiblogger's

Cleartrip "My Purpose" Contest.Go to page for more details and vote for me-->

You can also promote my post at Afshan's purpose of going to Coorg - 'A holiday after long tiring schedule at work with Family' | Cleartrip.com and win exciting prizes!! Thanks!

Email ThisBlogThis!Share to TwitterShare to FacebookShare to Pinterest
Labels: Tour