As and when I saw "this" I wanted to attend at any cost.

I have never been to an Indiblogger meet. Missed it twice in Gurgaon as I was out of the city and meets never happened in Hyderabad. We shifted to bangalore a fort night back and all I could think was of attending Indiblogger meet. We moved to the new apartment in whitefields on 20th morning and Indiblogger meet was on 20th noon 1 : 30 .I started at 12 and it took me a rough 2 hrs to reach the venue. I and my husband were feeling lethargic due to continuous work from 2 days and climbing the stairs to our flat which is in the fourth floor. Lift is not ready yet and my knee joints were actually painful due to climbing up , down , doing chores etc. So leaving the unpacked stuff in my apartment I started to Fortune hotel at Ananda Rao Circle.

As soon as I entered I felt like I am a terrestrial animal in the sea of all fishes and whales and may be big sharks who knew each other and who were familiar with such meets. Before I became breathless I registered , sipped the coke and my eyes searched for "Nabanita"as she was the one I knew among all as she reads my blogs many times ! I introduced my self and sat at their table and finally felt like a fish from the carp family which is the smallest fish but belongs to some family! I was still not comfortable as I am not good at mingling with faces I have never seen. Every one was comfortable in their own cozy groups. I somehow managed to share a word or two with Nabanita , Farida and recognised many faces which I saw via Indiblogger. I turned around and saw that many were feeling lost like me and was relieved.

I finally joined Ranjana and Sateesh from Qualcomm when we were asked to disperse and form groups. I was glad as most of them from the group[Sorry guys I forgot most of the names] were attending the event for the first time like me. The introduction round started and every one had to brief about themselves, their blog and say something about them which no one knows .The last bit was immediately changed by Anoop- the organizer  to - You have to just imitate your favorite character or say some dialogue. Many were entertaining where as few just gave a bland introduction , nevertheless so many got the goodies (books and USBS) for their introduction.  Tweeple were active. That was the moment I regretted as I never use twitter and I didn't feel like downloading and tweeting at the event . If I knew before hand that twitter would lead to winning goodies I would have practiced tweeting at home and would have put up an efficient tweet which explains "the pain I took to come to the meet" which in turn would have miraculously made me a winner :P

Some body imitated SRK , some one recited a poem and some one imitated kareena from jab we met. I believe its Sweta Tiwary . Most of them got goodies and so I was pretty excited when my name came in the last. I planned a lot in mind and even requested the guy who imitated SRK to help me with the parody of SRK- Kajol's hit scene in Kuch kuch hota hai, highlighting the plagiarism which will even echo the purpose of the meet !As my name came in the last and as sheets were distributed simultaneously for the next event I got little tensed but still managed to give a brief intro and my heart was in my mouth when I sang the song "Ye kaisa ladka hai " from kuch kuch hota hai instead of the scene we wanted to enact !

I believe many have enjoyed but I did not get the goody . May BE I COPIED KAJOL or some thing. I really dont know the reason for not getting it . My mood dimmed a bit as I saw many happily grabbing prizes ! I could not even shout or demand as I felt it will spoil the aura and anyway why should I have to beg for an USB or a book.

As I couldn't do the parody want to narrate it here.

Rahul comes on to the dais to receive the best blogger trophy.

I wanted to do this to say that plagiarism is a real bad thing one can do and that it has to be openly rebuked and such people should be treated like outcasts. I remember a case where a guy won too many prizes on indiblogger but it was found out later that he copied many entries. Well I couldn't implement my plan due to time constraint and little nervousness but I was glad I sang my favorite pair SRK-Kajol's most memorable fun song but ironically mai is baar bhi nai jeeti !! I was bit disappointed obviously as the feeling of competitions and prizes creeped in. It was like blowing up egos again!

The main agenda by HP which revolved around buying the original products and not the original copies was good. Often we buy the counterfeit products as they are cheap but every one should know that they are not as good as the original ones. People these days are used to pirated movies , pen drives in places like Palika bazar (delhi) . Every product has its copy . You should be wise enough to decide what to buy or else you will just be (an)other-vice.

HP did a great job in spreading the awareness and importance of originality! I firmly say a BIG NO to all the copies and cheaper products. I don't even feel good about clearance sales and discounts.Prevention is always better than the cure and its always good to keep your appliances safe rather than buying cheap stuff and inviting new problems but I have my share of experiences too years back when I used to get drawn to those cheaper products. Every shop with imitations and discounts used to draw me towards them like a bagpiper. I always end up buying some imitations of catwalk sandals or cheaper sports shoe which are not durable at all ,the  straps of which torn off easily and they don't serve their purpose. Another scenario was of a cheaper emergency lamp, a cheaper roti maker so on so forth. Hence , its wise to resist the temptations and not repent by buying the original products.

The presentation was good and the photo session of all the "original" bloggers was fun too. I didn't do it for a prize as I didn't feel like.  Prevention is always better than cure right ? :P
The bar code game went above my head and I couldn't find a snippet which matched my weird sentence " A pair of spectacles" or some thing . The meme game was fun where we got "Alice in the wonderland." As and when rabbit entered every one shouted the movie name. In all the hullabaloo I didn't get if we have to act in such a way that none understands or if we simply have to act !

The pace at which the printers and goodies were given away made me breathless and me and one of my team mates joked that in the tea break it might be announced by Anoop that the one who has the first gulab jamun wins a Printer. I mean , come on if Luck and twitter can help you win a goodie why not a gulab jamun :)

Well, this was my first meet and I knew none. Hence it was not loads of fun to me. I am glad I interacted with few whom I didn't know before. The primary purpose of the meet to me was to make contacts which I accomplished to some extent. As the event came to closure I left as I actually was getting late and had shit load of work to do at home and there were no remote signs of me getting a book or USB, hence was my question " What do you have to do to win a book or USB" to which Pooja Pradeep gave an apt and funny reply that you gotta sneeze or cough and update on twitter :) The other questions like if I were Renie , Why this Kolaveri di and answers were well OK to me, though not too hilarious.

It was not my day to win but after I left Ranjana called me up to inform that tee shirts were being given to all. When I came inside the hotel yet again leaving my husband at the gate who was waiting for me from an hour, the scene looked like a  " Famine hit area" where food packets are distributed to the victims. I grabbed a T shirt  and tried to VOICE my thoughts loudly this time and grabbed a book "Mice in Men" by Anirban bose and an USB which was given to me reluctantly. I later repented. " I SHOULD NOT HAVE ASKED." Well winning and asking are completely different things. Anyway now that I know the pattern , rules and formulations of the meets next time I will be having a fair idea if I attend.

Few to dos to win the goodies . I am answering my own question in blue font above

Thanks to Ranjana who informed about the tees. As I travelled 2hrs to come to venue and as Bangalore is new to me  I deserve to get goodies even if I had to ask which was quite a task.

Lastly I want to request every one to save your ass from being trapped by the counterfeits and buy the ORIGINAL products and stay happy. Check the company stamps ,holograms , QRcodes, bar codes and every thing you have to check to make sure you are buying the right product and ditching all the Copy cats and their Copy-wrongs(X)

The below is the HP Cartridge's security label with the unique QR code. These days as many have smart phones you can easily scan it with QR scanner apps .

Few clicks from the meet. 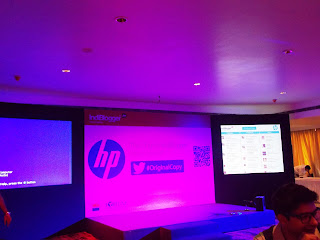 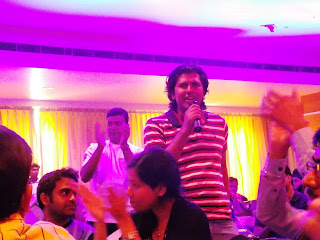 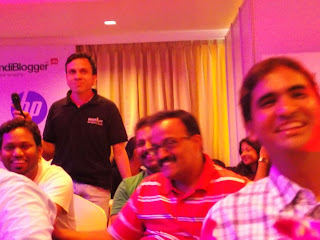 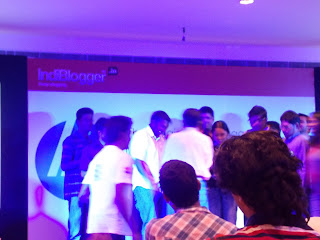