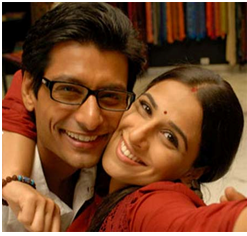 “KAHAANi” the title itself is so apt for the movie! Last night after watching the movie I was so relieved that I didn’t waste my money and finally went to a good movie after watching so much of trash in Hindi cinema. It’s a thriller movie so not going to leak any spoilers here, but I am tempted to mention just few names and few scenes which will for sure not spoil the movie watch. Kahaani is all about Vidya Bagchi who comes to India from London in search of her missing husband who visits Kolkata on some official assignment and suddenly disappears! The story oscillates between Arnab Bagchi and Milan Damji. The plot, twists and turns in the movie are so neat that there is no loop hole anywhere in the story. You will not doubt the integrity of the story till almost the end of the movie. As the movie is about to end audience will be clean bowled when the facts are unfolded. Vidya is so damn natural. Of course there is no need to mention this as she is an actress who should by now get used to bagging as many awards as possible. I became a fan of her after watching “The Dirty picture”. Yet again a proof being a part of a Khanna/Kapoor/Khan family or having good looks and zero size are not needed to sustain in Bollywood. We all know how many “poor-ka-poors” taste sour grapes as and when their movies get released! Anyway I don’t want to debate on benefits and losses of being a part of cine family! It can wait as now we are talking about the attention gripping movie Kahaani which is already declared a hit and is houseful on first Sunday adter release even in abroad! The plus points of the movie are 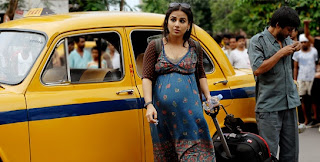 Ø Showing Kolkata, the nativity and the localities so amazingly and am so thankful to the story writer and the director who did not make it a Delhi/ Mumbai based routine flick.
Ø Vidya as a pregnant lady carried herself so naturally and her struggle to find her husband even in that condition is shown in an ultra-ambitious and chivalrous way!
Ø The suspense bits were portrayed so damn nicely that even the sharpest of the brains will not be able to guess who the culprit is and who is doing what till almost the end of the movie.
Ø The teeny weenie light moments in the movie are also worth mentioning like when Vidya hacks the system and says she does it in her spare time the sub inspector Rana asks her “You remember you are talking to a policevman right ?:)” , the child who acts as “running hot water supplier” and also the momentary humorous face of the dangerous serial killer Bob Biswas is funny.
Ø Every actor did his job rightly! I said “rightly” as there was no major blunder worth mentioning in the whole plot of the movie.
Ø Amitabh’s singing in the background even if it’s for a shorter stint. (Ekhla chalo re!)The song even if I don’t understand Bengali is soothing, rings in your heart and blended well with what’s happening in the movie at that moment both the Durga pooja and a sorrowful Vidya. Usha uthup’s voice is sexy for the sexy Kolkata song! Aami shotti bolchi!
Ø A literary brain like Advaita behind the screen who got this brilliant idea of “Kahaani” . Many thanks and best wishes to her at this huge success
Ø Well there are not many minuses to mention in the movie. The only thing which I felt was not much in demand for the movie which was already drilling the audience’s brain was the romance created between Rana and Vidya which he imagines for few seconds. But I didn’t mind much as its just for few seconds and it just vanishes in the seriousness of the movie!
When Vidya wears the traditional red and white Durga pooja Saree I remembered Vidya Balan of Parineeta and again was amazed to see how neatly she carries herself in any native look. All the actors shown in Kolkata were like true Bengalis which reinforced the movie. 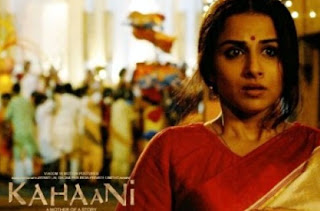 Want to watch many more such thriller movies in Bollywood or movies which really have a “kahaani” in them and I would really love to see many more actresses doing such different roles which would be delightful to watch and which really will attract audience to the theatres in the very first week rather than making them go buy the pirated DVD!
All in all Kahaani is a suspense thriller, so don’t delay watching it. Go with friends/ family/ cousins or even alone. You will enjoy with anyone or none. Kahaani is not a timepass pop-corn movie. It’s a movie where you will purchase pop-corn but for sure forget munching them for long as you will be immersed in the story / sequential events of the movie and this time I don’t want to even mention any Hollywood flick with which its matching-matching as there is absolutely no need of it. It has already got raving reviews and I am just trying to add little more icing on the cake. The whole cast and crew can happily celebrate the success!
Last but not the least I love you Vidya/ Bidda Bagchi J and hats off to Sujoy Gosh and Advaita kala. You inspire all the budding writers and ya I just loved the poster below that shows Vidya and Durga maa and the buzzing Kolkata behind !! 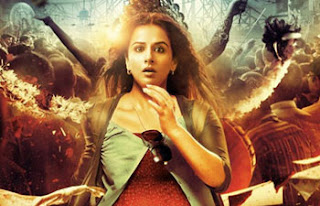 PS: Wanted to post it in the very first week but some how forgot!