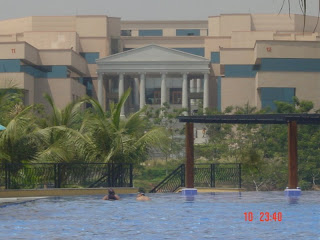 The dawn of Nov27th 2006 can never be forgotten.The most memorable day in all our lives!

Little confused, little frightened, little puzzled(thinking of the start in such a huge campus)WE ALL ENTERED the gates of Hootagalli Mysore INFOSYS Campus.We were all thrilled when we were given "THE PINK"cards(our first IDENTITY CARDS)at the Multiplex(our first destination in the campus).We were very much fascinated by the campus, thrilled a lot thinking about the new life, WERE AT THE VERGE of TEARS when we were bading bye bye to MamaPapa and college buddies..TRIED HARD To control the tears COZ WE BELIEVED WE ENTERED THE PROFESSIONAL LIFE!!!BUT IT WAS false….Through out the training we felt it was just like a student life reloaded again in our lives…A RARE BOON which rare people get!!As the INFY song was played"You are my INFY"we felt a shiver in spine…A NEW EXCITEMENT THAT WE are going to be a part of "INFY FAMILY"!

How can any one forget the sessions conducted at the multiplex? C-Life by Arun Nayar AASHI by PreetKushalappa..session by BRADLEY…popularly called Brad(cant remember the name of the session but it was NOT BORING I can say:-).Financial briefing of which not even a single word got absorbed in to our heads, still we tried concentrating on each and every WORD as if theres going to be an immediate test in it as INFY training and tests were already RULING our MINDS!"The first one week at INFY is like HONEYMOON then the marriage starts"!!These were the words of our Mentor Shashikala during the first Ice breaking session at INFY popularly called ILI sessions!( ==Infosys Leadership Institute).We all laughed at the joke but that sarcasm proved to be true:( but who can deny that we were laughing all the way in the midst of the TIGHT training schedule making friends FOREVER!!we didn't know that the training of nearly 5months is going to be such an unforgettable phase of ALL OUR LIVES!!

The role plays conducted made us laugh, bored us and made us sleep too at times, still we found FUN in everything.After the first week of icebreaking there came the HeadBreaking and the most important phase…. "TECHNICAL TRAINING"at the most renowned campus OF ,still it felt OK !CHSSC ,PF, RDBMS. The syllabus was flowing and exams were running simultaneously! Though we felt it was all like "A sheer COLLEGE" we all had fun at our answers, exams, sleeping sessions in classes(Ofcourse due to lack of proper sleep the previous Night) .TIME WAS JUST FLYING AWAY!!The tea made in the kettle and the noodles boiled secretly(as we were warned not to;-))became our staple food.We didn't realize BREAKFAST was deleted from our timetables…Got used to the same old boring coffee from the coffee machines, but felt good as we had it along with FRIENDS!!chat at FC3 and pizzas now and then for a change.,assignments submitted strictly in the very beginning days and CTRLC+CTRLV followed later :-) :-) MULTICASTS received in Ipmessenger..FUNNY FWDS nonstop GAGS and jokes. we dint realise it was JAN so sooooon…

Then came "the COMPRE"...The fun lasted till then lessened with the thoughts of EXIT POLICY!!

Some of the friends got separated after generic!!Entered stream which came to end with jet speed!!It was more fast than GENERIC…We PRAYED FOR OURSELVES. PRAYED FOR OUR FRIENDS as it is difficult to even dream of vacating the place after spending all these days here! PRAYERS were answered .The thought of losing people due to exit policy was terrible, still the thing which gave us courage was A forever SMILE on our faces which rejuvenated us!!FRIENDS WHO WERE WITH US TILL THE END!!!laughed with us:) cried with us!!:( THE DAY OF SEPARATION has finally come..ALL OF US got to go to their own places after trying all possibilities to get their most WANTED DC!!

The sudden thought of leaving ,our ROOM and friends was ODD, but TIME DOESN'T HALT for anyone!!ITS HARD TO C SMILES WHEN THERE ARE GOOD BYES:( but WE were excited as V finally accomplished the training and entered PRODUCTION!

The excitement did not last more than a week!!THE MECHANICAL life here …colleagues …onsite calls…business relations…the dialy routines…made the memories of INFY— more strong. Now we completed 2years here… but still the memories are afresh as if all the events happened JUST YESTERDAY!

For whatever length of time we may stay here ..say 3 4 or even 10years [:-0 ]the period from NOV27th 2006…till the completion of training in APR 2007 will be the most MEMORABLE ERA in the INFY REGIME!!I hope all our friendships last forever and ever.. CHEERS!!:)