How to Train Your Dragon- 2 : Premiere Experience

Last Saturday (June 7th) I went to watch the premiere show of How to Train your Dragon- 2 in Bangalore. It is produced by DreamWorks Animation and distributed by  20th Century Fox. Previously few premieres were released in Urvashi theatre in Lal Bagh Road. This time the premiere was more happening as I watched it in Phoenix mall , White field which is very near to my home. I am a frequent visitor to this mall, hence enjoyed the fact that premieres will be released in PVR of Phoenix mall going forward. The hustle bustle of the crowd as always was contagious. Many families adorned the red carpet with their kids, friends and parents. Every one was in high spirits and the arrangements were super good. The 3D glasses were provided at our own seats and the snacks were promptly given away to every one. Every one got settled in the comfy seats of PVR to finally have an adventurous ride on the Dragon.

The movie started with much applause and cheers from the crowd. This animated movie is a sequel to the 2010's How to Train Your Dragon. Below are few important names of the people who worked for the movie. (source : Wiki)
Even if you haven't watched part 1 before going to movie just like me, you will still be able to enjoy the part 2. Part 2 is charming , colorful and beautiful to say the least. The movie has a unique charm which draws you towards the screen, story, characters and you become one of them. This time it is more colorful with many dragons and the story line will attract adults and kids equally. The humor quotient is maintained. The flight on dragons reminded me harry potter a lot and that is one more reason I loved this more :)

Story line and my take : Hiccup, our hero and his dragon Nightfury which is named by him as Toothless live life their way ,searching for the adventurous new territories. Toothless is so cute and expressive. Their conversations are fun to watch. During one of his explorations Hiccup discovers that  Eret is capturing dragons for Drago - the bad man of the story, whom Stoick - Hiccup's dad who rules the kingdom of Berk knows from long. Stoick alerts his people to be prepared for war but Hiccup and his girl friend Astrid both hoping against the hope go to Eret to talk out and stop the war. The effort becomes waste and gives rise to fights and arguments. Another girl from Berk falls for Eret and starts flirting with him which is fun to watch :- )

Hiccup  angrily leaves the place with Toothless and comes across many surprises. The viewers will get awed along with Hiccup on seeing the magical land built with ice for Dragons. It is beautifully shot.  An alpha dragon called Bewilderbeast protects all the dragons in that land and every one obeys to him except the baby dragons. Each dragon looks different and very colorful.Drago attacks them along with a similar "bad" Bewilderbeast.  The fight between the two groups, basically the fight between good and bad happens for long till good wins like in any other movie but even if it is the animated characters who are fighting and not the real people, you will be engrossed in the war and feel  bad by the consequences. All is well that ends well but deaths and sacrifices also happen in this process which lead to a happy ending!

The audience for sure will leave the theater with happy smiles plastered on their faces.

Some of my favorite scenes:
1.) The moment when Stoick meets his wife Valka in the enchanted land of dragons

2.) The war and the moment when Toothless is controlled by the bad Bewilderbeast of Drago by hypnosis

3.) Every frame where Hiccup and Toothless shower love on each other

4.) The baby dragons' attack on Drago's army in the end

Hiccup: Dad, there is something you need to know.
[Hiccup takes Stoick and Gobber to where Valka is]
Gobber: Oh, boy...
Valka: [to Stoick] I know what you're gonna say...
Stoick the Vast: You're as beautiful as the day I lost you.

Astrid: THAT'S your mother?
Hiccup: Now you know where I get my dramatic flair.

Hiccup: [drawing a new spot on his map] What do you think? What should we name it?
[Toothless scratches under his arm with his snout]
Hiccup: Itchy Armpit it is.

Like every time this movie also made me happy. I loved this movie as much as I loved the Croods . The story line is simple and flows seamlessly with out boring you.  Any movie where the bond between human and pet is shown is my most favorite :) This movie is getting released all over the world on 13th of the June. Enjoy the dragon ride along with your family and friends. It for sure is worth it and do watch it in 3D as it magnifies the beauty of the movie.

Hoping to enjoy many more premieres in the phoenix mall. Good luck to the future ventures of Dreamworks - The penguins of Madagascar and Home.

Last but not the least, it felt so good to see my husband Imran Khan's name in the India Unit names during the end credits :)

The cute pet we have at home now : 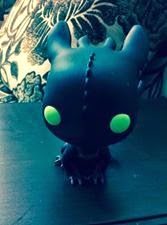