Almost all Indians love Mehndi. To know more go to this wiki link . Mehndi is usually applied on any special occasion , weddings, festivals and some times just like that. In India any wedding is incomplete with out a Mehndi. Getting Mehndied is the most important aspect of a wedding. Usually in most of the weddings we have a ceremony called - "Making of the bride." The traditions differ but few things are common among people of all religions and regions like applying haldi (turmeric paste), Chandan (Sandal wood paste) to a bride and then applying beautiful mehndi on her hands. In short people want the bride to look her best on her D-day. Some people over do it. Some just do it in right amounts , I mean the getting ready part. Since my childhood days I love getting mehndied so much so that I used to try and destroy my hands with weird designs which look like modern art when I was in school. Slowly with time I learnt how to do Mehndi, some times looking at the design book and some times on the fly. Eventually I improved. I can't say I excelled. Below is one of the decent Mehndi designs I made on my own hands for the Ramzan festival. 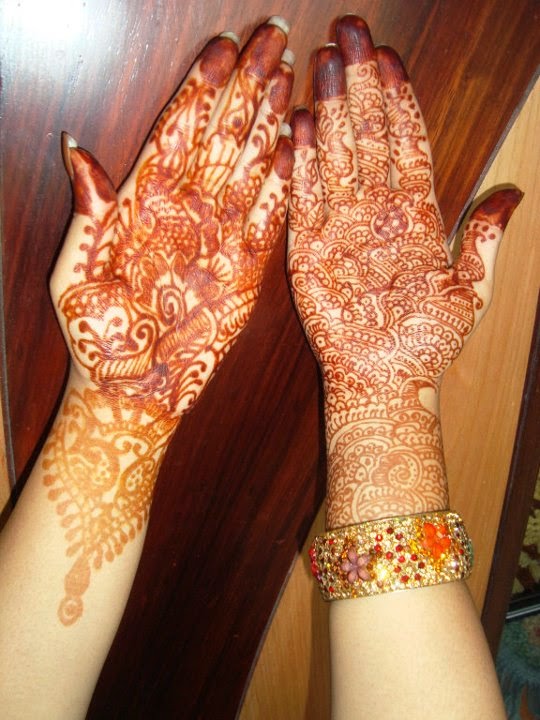 Mehndi ki raat or the Mehndi night is one of the important prewedding rituals in India which is celebrated a day before the wedding ceremony and is often combined with ‘sangeet’ ceremony and in many weddings it has lot of live music and dance just like in the video above:) . It is fun and celebrated with close knit friends and relatives. This song is definitely played in most of the Mehndi nights.

It is an age old tradition in a big fat Indian wedding where Mehndi is applied elaborately on bride's hands and  a token of application (a henna mark) is done on groom's hands as it is thought to be a good omen. The intricate design patterns will just leave you puzzled. I always observe the Mehndi-wallahs (those who apply Mehndi) very keenly and every damn time I am flabbergasted as I don't understand how they make so beautiful designs so quickly. Practice makes man perfect and mehndi perfect too :) Mostly men do the mehndi designs on bride's  hands and legs during weddings and do it with such an expertise that you can't take your eyes off their work and the designs! Mehndi ceremony is popular even in Bangladesh , Pakistan and other Arab countries.

We also have varieties in Mehndi like Arabic design , Rajasthani (Indian), Pakistani and African. To know more check here. Mehndi designs are also modernized with ornaments , crystals and sparkles! Hyderabad is one such city where you get many talented Mehndi wallahs.

"Some popular cultural beliefs of Mehndi"
"Mehndi bloopers" :P
That's all for now folks. Below is the pic of my mehndied hands and legs on the day before my wedding :) 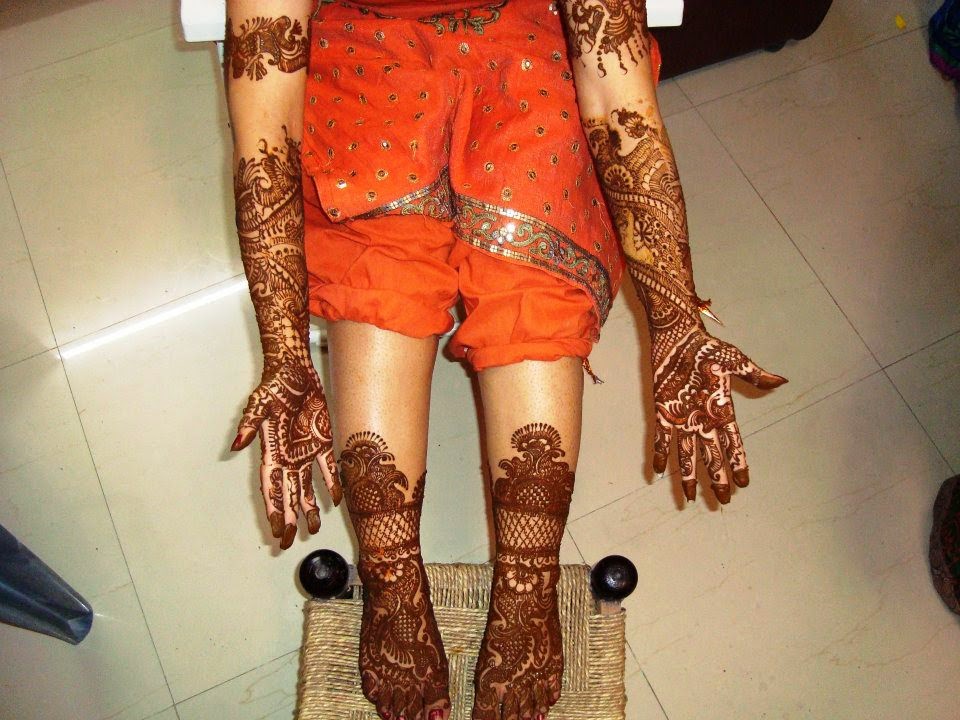 Have a beautiful day! Mehndi is one of the most beautiful art forms. If you never got it done, today is the day to try and if any one asks "what is the occasion and what are you celebrating?" Just say A to Z in life ;-) These are few amazing mehndi designs on Pinterest if you want to try.