The Day 22 prompt for "May Photo A Day Challenge : A challenge that will change your life" - 22. Change: This can be a hard one, so put your thinking cap on. How can you show change in a photo?

I changed a lot in a decade. A decade- my God!! I didn't realize when it got over. 2002-2012 just flew and I entered twenties from teens and as the clock is ticking I realize even thirties and forties will hit me :( I feel scared at times thinking of all the things I want to , need to and plan to do ! One of those things is for sure travelling and travelling a lot.

Today I will talk less and share a magnificent pic taken during one such travels. I went to Agra in the summer of 2010 and went again in winter 2012. Below pic shows the stark difference between Taj in summer and Taj in winter.

Nope I didn't modify the pic. You can clearly see the fog in the second pic. The magical and mystic Taj was invisible till we approached it where as in the first pic you can see the bright Taj basking in the sun light. Actually Taj remains intact. It is the season which plays with it and shows it differently. I wish I went to Taj on a full moon night. People say its a treat to eyes. The luminescent stones will shine and you can get lost watching it. Unfortunately I couldn't stay to watch it. Even the ticket price shoots up during the full moon it seems. One more speciality of Taj is the VIP seat. Lady Diana, Musharaff , Aishwarya Rai and many others adorned it.

I am not  a fan of Aish but still feel like sharing the below pic which I like a lot. 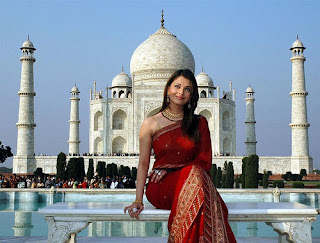 and no points to  guess that one more person adorned it. Check it out in the below pic ;) 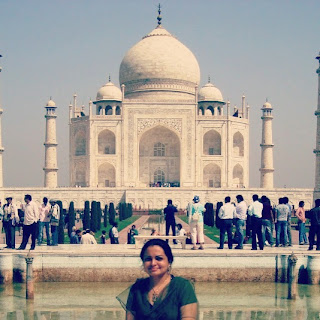 Taj mahal always surprises me. Even the second time I visited I keenly observed the surroundings and enjoyed the intricate designs ,patterns and symmetry. It surely is a wonder! I wrote a post on Taj few months back with few more pics. If interested  read at-"The beautiful and controversial Tajmahal"

Email ThisBlogThis!Share to TwitterShare to FacebookShare to Pinterest
Labels: May Photo a Day Challenge