The cast and crew of  Ek thi Daayan tempted me to go watch it asap.  Emran Hashmi who proved in recent past that he is not just the kissing king , Konkana sen who came back after a long hiatus , Huma Qureshi the Gangs of Wasseypur fame and needless to say a good actress like Kalki Koechlin pulled me towards the theatre.  Ek thi Daayan in English means there was once a witch. The terms like Witch or Dracula fill a sense of fear in heart. Konkana Sen as the Daayan or Diana made me jump off my seat a couple of times in the first half. I closed my eyes while watching Konkana’s eerie entry where she is not shown vividly like in any other horror movie! The story starts with our great magician Bobo (Emran hashmi) performing harmful magical tricks in Kingdom of dreams. Everyone looked promising and apt for their roles. Tamara played by Huma is a perfect partner to Bobo who tries to end his fear and hallucinations but they never stop. Bobo’s childhood and her sister’s mysterious death haunt him all the years and the wicked daayan doesn’t come back as she actually never left his side.

Konkana looks so evil and stole the show in the first half. I actually checked if the elevator in my apartment had the “6” button in it. Thankfully we had no sixth floor. To know more you should watch the movie and know the significance of “666.” Visesh Tiwari performed brilliantly as the kid Bobo and his innocent sister and the horrible end to the first half makes one squirm! First time director Kannan Iyer, writer Mukul Sharma and the writer/producer Vishal Bharadwaj excellently managed the story till interval and succeeded in scaring the shit out of viewers. Post intermission Kalki enters as Lisa dutt confusing the already confused Bobo little more. Kalki’s role and the dialogues were not up to the mark and the sudden twist diluted the spook quotient and turned the movie to a humorous watch. I shouted in the first half and laughed loud in the last scene. I wish I was transfixed to my seat till the end. The only fault of horror movies in India is analyzing each and every aspect and frame leading to a haywire end. Few things should be left unsolved!

Needless to say the ending was disappointing. All in all the performances of actors and actresses were top notch and raised the bar of quality level horror movies in India. Pawan Malhotra was natural as Bobo’s bewitched dad in the first half and Rajtava Dutta as the puzzled hypnotist was perfect for the script! Saurabh Goswami's cinematography is worth applause. Music by Gulzar is good. I am tuned to yaaram song from the day I watched the movie . Tote Ud gaye is fun to watch. . All the ladies are seductive but Konkana for sure ruled. I now watch behind my back in a lift! She is one hell of a witch whom you will remember for years 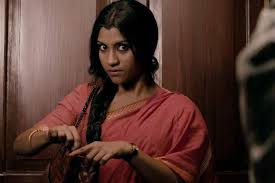 The elevator, lizard and all the subtle hints of diabolism made me sleep deprived for two days. I was actually scared when power went off in the mid of the night. As a final verdict I can say the movie is better than many horror movies made in India in the past. If only the ending was as good as the beginning I would have stated that this is the best horror movie so far!

Below is a glimpse of the movie and  my favorite song Yaaram !