"If only people were smarter than the apps!"

Can any one behave smart when they face danger? Can you use your brain and think when you are surrounded by robbers? Can any one show valor when they are being tortured by rapists Nine out of ten times , it is tough to show courage when fear fills our heart.

During such moments rather than using our own brain it is advisable to inform our near and dear about the situation. Some times even doing that seems a far fetched step , but pressing one button and alerting our parents , friends and getting our location tracked will for sure make us little confident. That's where the Smart  Suraksha app comes in to picture.It helps us do the same and we can face the situation with a renewed courage I wish she had "Smart Suraksha" with her. This is what I thought when I read about this app. Its not just about a particular "woman." I feel every woman or to that matter every man must have this app installed in the mobile. I wish the girl who was molested in Guwahati had this feature in the mobile. Not that she would have fought back the monsters by a single click but she definitely would have gained little courage to face them. I wish all the women who face anti social elements and criminals day in, day out have the facility to use this android app. When the surrounding public behave dumb at least smart apps like these come to our rescue.

I think by using this app the frequency of  eve teasing cases , robberies ,rapes and other crimes can be reduced. It will come handy to those employees who stay in office till late in the night and travel in cabs. This app will be like a virtual protective shield in their hands. Not that they become super women and fight back using their mobiles but they can stay assured that they are near to their well wishers.

Not long back a fellow employee was robbed by an auto rickshaw driver . She was beaten up and her belongings , wallet , ATM card and every thing was seized and she was pushed out of the auto in an area far flunged from office. She was clueless and helpless. Other than crying and shouting out her plight to those who approached her after the robbery she could do nothing else. If only she had a smart app she would have tried to inform people by using it.

People who are bullied every day, people who get ragged in a vulgar way, people who work in  unsafe areas and get scared to travel back home. I wish each and every one install the smart suraksha app on their mobiles and stay safe.

May be just may be the crime rate will be reduced when one starts using this app. This is my wishful thinking and I am praying my wish gets fulfilled.

Of course the thing which I am not sure of is, will people get time to even grab their mobiles ?  Every one has to be quick and witty to at least click the button! I wish suraksha app becomes available on IOS too :)

Lastly a poem written by me for everyone.

"If only people were smarter than the apps.

If only every one had the courage to face the mobs.

If only wits , actions and bravery over powered the fear.

If only we had super powers we would have saved a tear.

If only every one was loved , protected and fathered.

If only instead of an app a fellow human being bothered!" 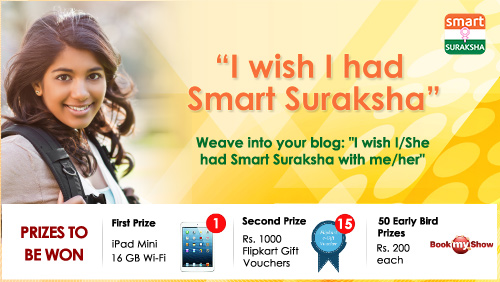 Note from "blogadda": The Smart Suraksha App is an Android Application that aims at making the women feel safe. This App, at the press of a single button, sends your message of help to five pre-chosen contacts from your contact list. An additional feature of this app is that along with your message for help, it also sends across your location even if the GPS on your cellphone is switched off. Thus, the women can be reassured that there is help available at all times.
- October 15, 2013