It is truly said that three apples revolutionized life. One is the Adam's apple , the other Newton's and the third is Steve Job's apple!

First apple indeed was pleasurable. The second one which highlighted gravity made me philosophical too as we have to fall down some day at some point even if we reach the skies but this apple which fell from the tree did become tasty when it was bitten by "Steve Jobs" :)

I am not here to review the apple products or describe their technicalities. This post simply shows how much I got addicted to my I-touch and I-phone and the love-hate relation ship I have with them! Till I was gifted an I phone 4S by my husband I had a simple Nokia 7610 which served well for music and for pics. Oopsie ! A phone is used to make calls right but with the intervention of smart phones who remembers calling the other person !? Calling each other looks out of fashion now. Alexander Grahambell's soul would have become rest less up above there when he realized that people stopped talking to each other using his simple device even if it gave rise to new ideas!

Interviews happen on skype or some times on a google hang out. Boss pings on whats app. Friend asks if I have an I-message option or Facetime (video calling) activated. I-message is some thing where you can sms free of cost if you have an I phone and wy fi or 2G internet plan activated provided the other person has an I phone too. I phone has few restrictions and features which can't be customized. Still it remains the sexiest touch phone. Many other brands have tried to recreate the "touch" feel of  apple products and failed.

My affair with I phone started an year back and its still flourishing and blossoming as days go by in spite of few fights and few dissatisfied moments. It is very sensitive and if there is a damage it is irreparable. Hence you gotta handle it with extreme care. Some times due to many apps the phone hangs. You cannot have custom ring tonnes. I dislike the absence of last feature most :(. After IOS 6 up-gradation people were outrageous on FB cursing even the dead Steve as few old apps stopped working and google maps which are directly sent by GOD vanished. Every one anxiously waited for the "jail break". They prayed god to send their beloved maps again!

I wondered if "G"od and Steve had a strife up there in the clouds on using Samsung galaxy tab to record the deaths or an i-pad. Meanwhile some where between heaven and hell the conversation must have gone some thing like this between God and Steve

God : "You think you could do better than Samsung?"

Steve : "I-hurt, because apple doesn't need a demo but still for your sake I will give you a demo as you are god and there is no denying you."

Steve: "Go to app store and down load I-death app and check out all the cool features. It records your birth date , death date , how you died  and what can you do in your next birth to avoid speedy death."

God: Show me a new job it does Jobs. All these are present in my Samsung Galaxy tab too.

Steve : Just observe how cool it is God.  It has few restrictions. Say you are operating it , it will show you all the features and details. You will be the admin. Angels will not have rights to see every thing in the app. You may give them rights as per your will. Suppose its a natural death you can put up white hospital corridors.You can just swipe and change the back ground depending on how the person died. If he died in a road crash you can change it to a car crash with a "vrrrrrrrroooooom" sound as an add on

God scratched his head and was bit confused as he found it quite magical.

Steve : Plain is boring . Plain is not innovative god ! Let us take your creation for example. Are all the creatures plain? Some are handsome , some ugly , some strong , some weak. One needs innovation and   up-gradation . Other wise life oops death also is not interesting God ! Also you need not scroll down and check how he died because the back ground will immediately help you to conclude the reason for death.

God :  Well it looks cool but I would still prefer my Samsung with android software. I am used to it.

Steve : If you are used to it its easy to get un-used to it if you use my phone , I mean I-phone God. Just check the names of my products. I am sure such thoughts never came to your mind :-).
Steve finished the line smugly. 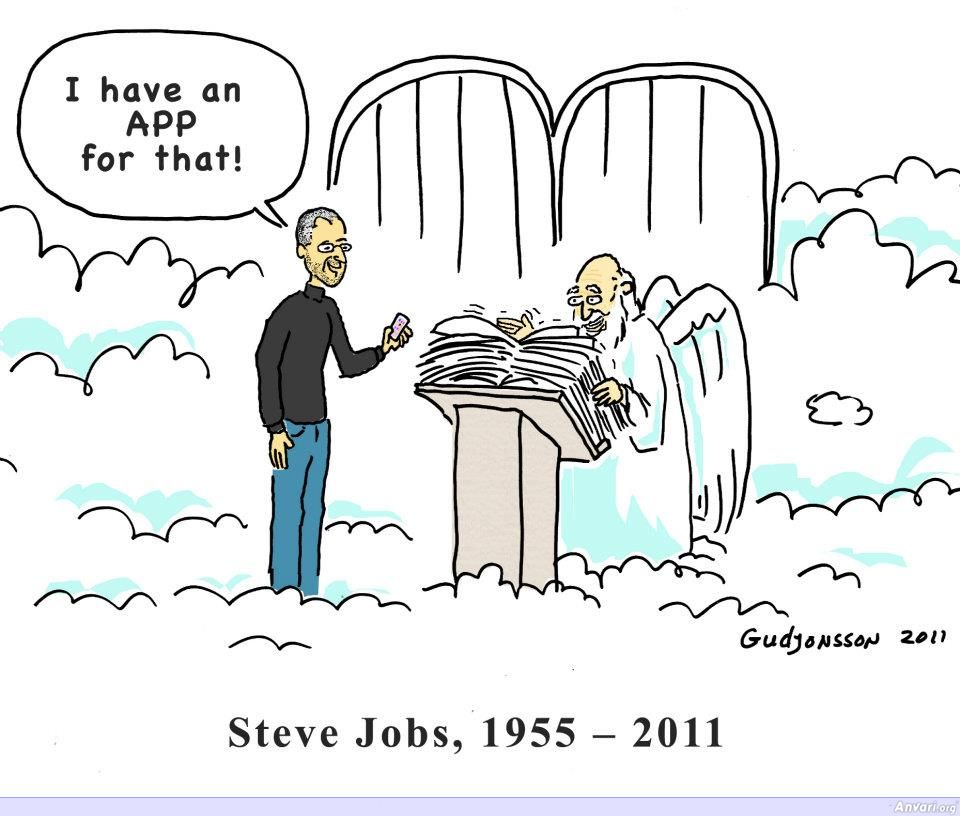 God got a bit offended and replied : " So you think you are greater than me ?"

Steve. "Well I didn't actually say that but down there on earth many worship me. There are 90% geeks in the population and I am their idol. They look at me with respect."

God: "Aah ! So they worship you ? Whats your next plan ? To get a church built for you or to get a sleek I-scribble replace the bible? It already pisses me off when I see people reading their Bible verses using apps. hmmpf !"

Steve was little terrified this time.

S : "No No  God. I did not mean that . I was just asking you to try my product. Only then you will understand how much beautiful it is!"

Angel cornered the god and whispered in his ears.

Angel : "God ! This man makes sense . He is surely one of the most iconic personalities on earth. People love him. I-checked the records on the tab and it took a bloody one hour to load them!"

God: "Whatever. He is too confident and so full of himself. This time I am not going to use them. May be later."

God : " I am not interested in your I-death app. I will continue with my tab. We will put it to trial for 6 months and later think on it . Meanwhile lets see how your IOS 6 survives with out my paths and ways , the Google maps."

Steve : "Oh God!  Please don't do that . I agree I was not low in my tone but what can I do ? I am used to being confident , successful and speaking in a tone which should rise the belief of folks around me."

God: " Whatever ! For now your I-phone and I-death are all under trial. Lets meet after 6 months."

After few months there was an app for google maps as well in IOS6 and every one on Earth were happy again to be back to google maps and in the heaven God consented angels to use I-pad, I-phone and I-death, I-birth and many more apps. God  was so happy that he even seemed to develop a soft corner towards Eve who had bitten the forbidden apple ;) . Steve was all set to use his master brain there to create more apps and do more up gradations and heaven was never a more happy place. Every one played temple run , angry birds and if they got bored Steve was ready to upgrade it to 2.0 , 3.0 and 4.0 versions. Steve was loved even in the skies :)

I love Steve jobs. I -shattered when I heard of his death . He is my role model and it was pretty sad to know that he died of pancreatic cancer. Big people , big brains and big diseases ;( You all know how Jobs revolutionized the world so I am not going to it as it will be all over the google (the "God" :) ). This is my small/ big tribute to Steve Jobs and his intelligence . There are many Steve--God jokes in the internet. The below one is also my favorite. I even love the jokes of Apple suing Maruthi for copying the slide idea and some jokes shared like below .

Few love Samsung and few love Apple. What ever may be the compliments or brick bats I absolutely love my I phone and I-got hooked like never before. I finished all angry birds levels and versions present till now. I use many games apps,  fun apps, I-tunes, What'sapp and many more. Only disadvantage is getting less time to read  sometimes. I even read using book apps present on my phone. May be there are few more disadvantages but who cares as long as you own an I-phone ;) ?

This was a poem I wrote years back when I got I-pod touch as birth day gift. Read "I-love"

As an end note I-love and I-heart my I-phone. 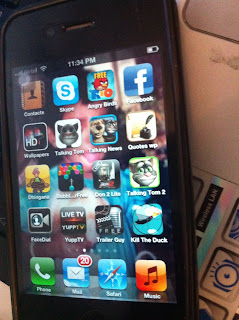