Today am going to do a post which some of you may not like ! A brief conversation with an intermediate friend (Plus 1+ plus 2 after schooling or 11th ,12th as CBSE(Central Board of Secondary Education) folks may like to call it) gave a  sudden urge to write this post. She posted a pic from intermediate and you know how easy it is to fall deep in to the valley of nostalgia by just a nudge from a friend you know from long! So coming back to the post. I am a Bio student. I did intermediate in Vijayawada(A.P.). My group is Bi.P.C. (Biology Physics Chemistry). Yep I jumped in joy when I had to quit maths but maths did not quit me in later years! All was jolly good as I enjoy Biology. I never "study" it. It just comes to me like that peace which evades a person after a successful nirvana. Biology was that to me.

I shifted gears and changed career but I still can say what Ficus Benghalensis (Banyan tree) is, what does it mean by nuptial flight in case of an ant, termite or a cockroach (OK! we all remember such interesting facts where ever we read ;) ). I actually witnessed a flying cockroach early in the morning and was shocked to know that Biology is something which actually happens! It is the natural science. A god made subject and not created by us. Macaca Radiata is one scientific name I found interesting . It in lay man terms is a monkey. We even created email ids which go like macaca123 , macaca love etc. Every thing about Biology amuses me. Why are leaves green ? How you get the delicious vanilla from its tendrils and how flourishing the business of  selling vanilla is. Those days it was 500/- per kg. The fact that flowers bloom actually due to love surprised me. I mean flower is the actual reproductive structure which helps the pollen grains (similar to sperms) and eggs to meet! Yep. No kidding here. The mechanism is same even in plants. Few differ and generate spores instead of the actual fertilization. Flowers further give rise to fruits and seeds. Anyway before I dive in to a botany / zoology lecture I want to tell you about a dreadful day when my love for Biology scared me to death !

In Intermediate 2nd year we have practicals in which we were supposed to do dissection. I froze when the word "dissection" came out of my Zoology lecturer. I was trying to find ways to escape but hell there was no running away from it. We even had a final exam and hence I had to attend the practicals for practice. We were all jubilant when we were asked to purchase dissection boxes, records and charts! Anything new is good till we actually use it !
Prim and proper I entered the lab in the backyard of the college . To my dismay there was a tank full of chloroform in which few frogs were floating and trying to escape. Few were screeching, croaking or moaning . Few were already unconscious. As I write this I am getting goosies. I was sure they can't jump out of it and jog but I wanted to do the same. That moment I could have given any thing to just escape from that barbarous place!

I was almost pushed in to the lab by few friends where on the cutting board (as if we will cut some veggies and Chicken on it to make a delicious dish :( :( ) earth worms were ready. Not to cut and eat but to dissect and see whats inside. "Why the hell should we see the insides of it :( We already saw in the text book no". I spoke to myself. I turned a pale shade of red as I was actually tensed but the earth worm was finally murdered by me. I  pinned it on the board and sliced it in to two , One longitudinal cut from top to bottom was enough. By God's grace nothing oozed out. It was just mud as earth worm is a simple creature. As we move up the pyramid of life gets complex with complicated creatures and their extravagant food habits ! The more you eat the more trash you can expect inside you and more painful your death will be. Earthworm just embraced the death and it was all mud which came out of it! 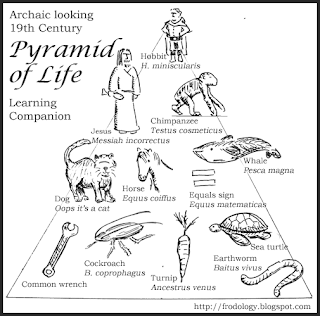 Now came the frog's turn. I was almost breathless when frogs were put on our boards. I felt like puking. The whole room had the stench of some fish+sea . I rarely eat fish and the desire totally died that day. Being an amphibian, frog possesses some characteristics of water animals, hence the smell! Luckily I got a male frog. One way to differentiate them by external features is by checking fingers. Male frog's thumbs are thickly padded compared to females. Female frogs are pain as you get heaps of golden brown eggs inside ! You need to separate them to see the organs. Mine was a thin one thankfully. How obesity can make things worse even in such situations *sighhh* ! It was slim but cutting it was painful as it was conscious. I was actually blood red in shade now as I thought of a possibility of frog attacking me. I have very bad frog memories which I will say in some other post. I actually thought some thing like in the below pic may happen !

It was moving when I pinned it and I tried cutting the skin layer like in the above pic all the while resisting my urge to puke. I was panicky as it moved little more. I immediately nailed all its legs and felt very guilty about it. Once I removed the fat I could see the organs. The lab instructor asked me to cut jugular vein. I was shivering. Jugular vein connects the head and heart if I still remember . It helps in carrying deoxygenated blood to heart. I finally had cut that blue vein after which blood oozed out and even the frog moaned a bit. I realized I had killed it. We then studied several systems - reproductive , digestive , nervous and many more.I shudder even today when I remember that murder ! Its not a joke when I say cockroach dissection scared me more :)

The frog's heart continued beating even after it died and mine was racing. I walked away and stood behind every one as I really couldn't see what all was happening. After a thorough study(god knows what I studied.  I was just counting the seconds) we threw the parts in a plastic disposal bag , cleaned the boards and instruments and walked out. I did not have my lunch that  day and did not have noodles for some days as its intestines resembled them :( It may not be tough to people who cook and eat frogs but to me it was a dreadful experience and call me sensitive but I almost cried that day !

Biology still remains my most favorite subject in spite of all this . Only thing is I will never approach a frog even if it is wearing a crown and even if some one claims it will turn to Ryan Gosling :D

Happy "D" Day to you all :) I leave you with a frog joke below :D Meet you all soon