I always want to be like Sri"Devi"- A tribute 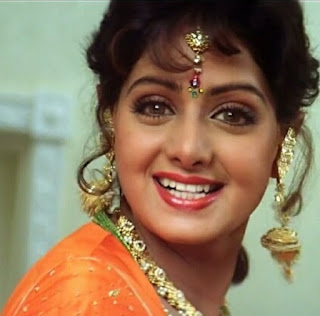 I might have just been out of my kinder garten when the flim Jagadeka veerudu atiloka sundari (telugu) got released. After some days I watched Mr.India . Years passed and I made it a point to watch anything and everything in which she appeared! I was enthralled , speechless and amazed looking at the cute and beautiful sridevi . Off screen when she spoke she was all shy and submissive! I was surprised to see the huge transformation she showed on screen. She is like the potter's mould which can be made in any shape you like, a director's actress as they say!

Infact I did the ribbon cutting of going to theater and watching movies some where in 1988 with the Nagarjuna and Sri starrer Akhari poratam (http://en.wikipedia.org/wiki/Aakhari_Poratam). I dont remember going and watching it . This is what my mom told me! May be Sri got imprinted in my mind since then. I never liked any other actress as much as I liked her.I always thought of buying the plain blue saree she wears in Mister India and my first saree infact was plain blue :)

I always wanted to own the accessories she wears in Jagadeka veerudu Atiloka sundari, in which Sri acts along with Chirenjeevi as Indra's daughter who comes from heaven to earth to collect her ring with out which she cant go inside the gates of heaven. Chirenjeevi collects it not knowing its powers! At least the audience from south know the craze this movie gained. When in school we got a chance to watch it again, when I was in 2nd or 3rd standard. It was a charity show. I was extremely delighted. All kids were eating , shouting and moving in and out but I was transfixed to my seat in the second row from bottom watching Sri ! I always dreamed to be like her and for the reader's information abbani teeyani debba by Ilaya raja in the same movie is the original tune adopted by "Dhak Dhak Karne laga"! 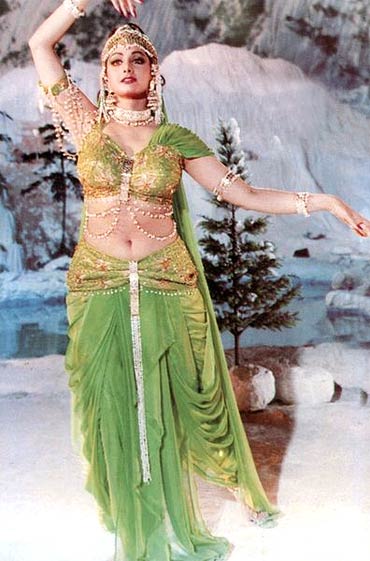 Her eyes , her kid like voice , her sex appeal  make a tempting combo and are matchless to me . She acted like a daughter to NTR (the veteran actor in telugu) and after few years she acted opposite to him. She acted with ANR and also his offspring  Nagarjuna. People always exclaim that she is capable of acting with Nagarjuna's son too and now that he is in to movies am sure it is not impossible :)

Her "Fun quotient" is higher than many leading ladies. It comes naturally. The silly scenes in many movies are humorous only coz Sri acted in them. She indeed has that funny bone! Who can forget HAWA HAWAAI !? where she eats fruits from her hat. Just a reminder of that scene feels like giving a peck to her :)I always wanted to be a lady like her or at least a man who can romance her. Pity! I am none ;) A poem I wrote for this gorgeous woman- Written in the perspective of a man who watches Sri. 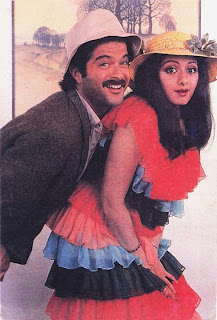 "I thought it is a black pearl shining on a golden necklace,
then I realized it is a mole shining on your golden face.


I thought the sculpture of Khajuraho became alive,


then I saw you dancing to many tunes full of life!


My heart gave a skip and I couldn't stop staring at you.


You ignored me as if I am a false alarm when every bit of it is true!


I lose my senses when you smile and your eyes beam.


Holding your hands and being with you is my dearest dream!!” 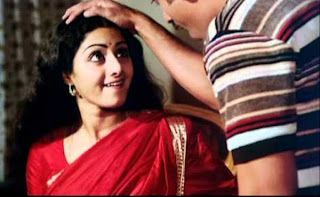 Time passed and I grew up a bit of course not prettiest like her but always imitating her , dreaming about her. Let me reveal a secret here which I have been hiding from  15years--When my aunts and uncles used to pass compliments, that a cousin sister of mine just looked like her, I used to burn with jealousy! I always thought - WHY NOT ME ?

"SADMA" is her master piece ! More than her, Kamal hasan made me cry in sadma but their  legendary performances are not to be compared! I watched it very late when I was somewhere in 5th or 6th standard and I remember crying when Sri leaves Kamal in the railway station. I felt Ranbir Kapoor also watched this movie which assisted him in Barfi ! After watching Sadma (Vasantha kokila in telugu) I felt she is the synonym of cuteness! God made her with precision, of-course there are people who point at the nose - plastic surgery .To enhance her beauty as she is an actress, she would have done that but nevertheless she was always bful and full of grace!
Sadma last scene
None can forget films like "Chandni"  (the dance in the white attire), "Chalbaaz(double role),""Laadla" and so on where she plays a confident and powerful lady! She is the one who is always remembered as the only lady who gave competition to heroes in 80s! When any one says "Khuda gawaah" I only remember sridevi . It always comes as a second thought that Amitab Bachan also acted in it.He gets unnoticed in the aura of Benazir's (Sridevi's name in the movie) beauty.

Not sure in how many languages she got recognition and won best actress awards but I am sure 5 out of 10 girls in India would have aspired to look like her or imitate her in one or the other aspects of their lives!
Time flew and we came to mid nineties . She did movies like " Kshana Kshanam" in Telugu made by Ram gopal Varma. Thanks to RGV only for this as he showed her much more beautiful and simplicity and cuteness personified in the movie. She wears same long skirt in the whole movie other than in the dream sequence songs ! This is a movie shot completely outdoor on the roads and the first one of its kind. Not sure after that how many movies were made based on the same concept (Urmila did a similar one. Anthra mali also tried to imitate).

She came out with a role in Judaai where she doesnt mind selling her husband to become rich(Originally a telugu movie done by Aamani). It was her major release in 1997 may be before or after Army and I came to know that she will not be acting any more in the movies. I too cursed her husband like RGV did but then realised it is her personal decision and her choice but as a die hard fan I felt a lacuna inside! I was no longer interested in many tolly - bolly wood heroines who always tried imitating her. Many say Sri is their source of inspiration but fail in doing the similar acting in their movies! Sri who is acting from the age of 4 leaving the movies suddenly dimmed the INDIAN CINEMA. It is definitely a blow to fans  who wanted to see more of her. After such a blow and after a hiatus of nearly 15years SRI IS COMING BACK!  From the day I heard this news, no other breaking news soothes my ears as much as this! 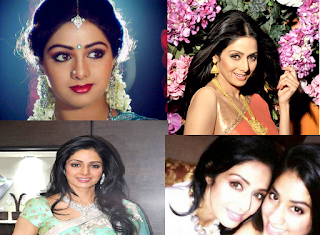 While waiting for the release of English Vinglish, I wanted to pay a small(which as it turns out is huge;)) tribute to my style icon , my  beauty queen and role model since I was 4. Where can I end this article? There's lot more to tell about her . I never get tired of praising her .
Sridevi as child artist 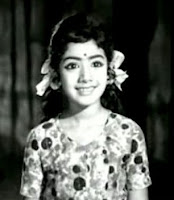 Long before the release it became the most awaited movie of 2012 and Sri would be passing on that prettiest smile knowing that her fans are dying to see her on the screen. The excitement I feel when ever she comes on the small/big screen hasn't lessened a bit even after all these years! Some of them are after her looks saying she lost the charm / got surgeries done / got old and what not. People really tend to believe she is "atilokasundari"( plays as lord Indra's daughter) who is immortal and will never age but she is a human gracing her age and she remains my style icon forever and I will always stay enchanted in forth coming years too when her head would be filled with grey hair and her skin might be pale and wrinkled! Welcoming her with all love ♥

I wish success to English Vinglish and all future ventures!
Loads of love and wishes to my favorite actress . Wishing to see her in multiple languages -hindi , tamil , telugu , kannada and so on like before  and dreaming to be like her as always ! 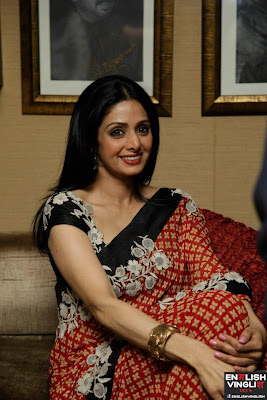