God am getting goosies even while taking the name of this movie. From many months/may be an year or two I wanted to watch this movie but somehow as they say when its time its time and to me it was such a bad time that Paranormal activity 2 got telecasted in HBO on a Friday noon when I was all alone at home, sitting idle and this movie was the only best option I had to spend my noon. I preferred it over the routine boring soaps and many other movies which I watched “n” number of times. So I  switched on the TV and wasn’t scared much till the hidden security cameras were installed all over their place(who ever watched the movie will understand it.)Director Tod William’s Screen play/cinematography/story/editing’s brilliance is worth applause! I never got so scared by watching any horror movie so much! Before watching this I got only scared by watching “The Orphanage” and “The Grudge” at times but this movie really scared the shit out of me MAN!! The start was very slow, calm and silent but there lies the beauty of the movie. It proved that its not needed to show grotesque and gory demonic faces sucking blood from innocents to scare the viewers. The silence is more horrifying and the “found footage” technique used in movie where Kristie and Daniel get security cameras installed at home make the movie more effective when compared to normally shot horror movies.

A shot from the movie[I coudnt browse many images too :-( ] 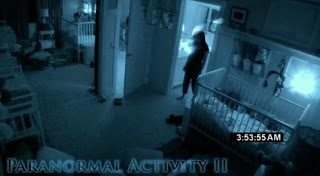 I think the director all the while was just holding a handy cam or just mounted the camera on tripod(as per Wiki) and shot few scenes! It makes you feel as if you are there , live in all those scenes! I shouted loud when Kristie is having tea in kitchen and all the cup boards and kitchen drawers open by themselves with a loud bang.  I just couldn’t watch beyond it. I closed my eyes and peeped through the gaps as I didn’t want to miss what all is happening on the screen! We always use spooky/ gory/ horrifying to describe a good horror movie , but this one stands apart as it made me feel “Am being watched” and as if I  was standing infront of camera and watching Kristie, Daniel, Hunter closely. I was scared by myself L . It was a quite afternoon with none at home! I literally wanted company and updated my FB status that watching it all alone is an add on to the effect. It didn’t help me as my friends scared me more by saying to switch on all the lights as sun sets/ lock the doors/ don’t go in to kitchen/ opem the fridge etc etc!!! L How am I going to make my dinner? Was the biggest question I had at that moment. With me the thing is if am involved am totally involved and if I cant get involved no one can try and make me concentrate.

Here I was involved so much that I got startled as soon as my phone rang when I was watching the movie.  I reduced the volume and took the call only to find out that its some automated customer call asking me to select a dialer tone. Don’t know why but every thing was adding to my fears! I was  getting scared beyond limits but I didn’t change the channel. My curiosity increased when Kristie is dragged by some invisible demonic force in to basement and she is possessed. Every scene from that point was so natural as if you are watching it live and I just held my breath to see whats gonna happen to hunter. I couldn’t resist my curiosity and read in wiki , the whole story  . I was astounded to find a blurry figure of Katie in the background who is possessed by the end of the movie and she kills Daniel and next gives such a hard punch to Kristie that she is lifted upwards and falls back with all force. She takes hunter (the baby boy) from Kristie and goes away, Hunter’s initial cries turning to laughter.

To know more go to http://en.wikipedia.org/wiki/Paranormal_Activity_2 . Ali comes back from school picnic and finds them both killed and Katie and Hunters where abouts remain a mystery!

Phew the movie was over.  I let out a sigh of relief but didn’t change channel or switch off the Tv.  I WAS disturbed even by the background score of camera getting adjusted during the titles after movie ended. Irritated by the sound I changed the channel but god the images were so clear in my mind and  I was continuously remembering the scenes from the movie. I switched on all the lights and also the light at stair case and veranda. I prayed and took a bath, all the while trying to forget it but the movie came back with all force in to my creepy mind which was all set to bring even all other horror memories on to surface. I cursed myself for watching it alone and made some tea for myself to feel better. Oh god , the lonely feeling was haunting me L

I called up my husband and asked him to come back soon as he had to return by 11 that night and even our owners who live down stairs left for U.S.A. recently !He scolded me for watching it in wrong time if I was so scared  and promised to come back soon. Then  I browsed through some blogs and got engrossed in reading and when my stomach was roaring I realized I hadn’t eaten any thing and the time was 09:45  in night. Shit man!why did I delay my dinner?:( Now I had to go in to kitchen all  alone. I switched on the TV. Put some music channel on full volume and then made rotis and had the fastest dinner ever and came back to my original position, a chair with laptop on my lap. I was counting minutes now for him to return who told he is almost done and finally returned at about 11. Even when he knocked I double checked before I opened the doorL
Phew such was the scary experience I had after watching the movie. Silence and calmness is more haunting seriously! I am very eager to watch 1st and 3rd parts too but am not able to pick enough courage peopleL but I have decided I will never watch paranormal activity to that matter not even any silly horror story alone. Mind plays merciless games with me!  I don’t know if any of you had similar experiences. If yes do share and give me ideas to be gutsy enough to watch other two parts too as I really loved the movie. Kudos to the people who ever got the idea of  making a movie  like this. A round of applause to Tod Williams, Michael Perry and all others who played a major role in making this one of the most horrific watches
PS: I hope to get teeny weeny amount of guts back after writing this
Chao!