Vicky Donor- A fine delivery of a healthy baby;)

Vicky Donor- He doesn’t donate life saving blood, kidney or bone marrow; instead he gives new life by donating sperms. A fresh story giving importance to the fact that sperm donation is not an act to be ashamed of  , its rather a noble act which can bring happiness to so many parents devoid of kids! The concept is presented in a light breeze with out burdening you with heavy emotional drama! The entire first half of the movie is filled with such quick comedy that makes you fall of your seat.  director Shoojit Sircar and writer Juhi Chaturvedi created a total comic drama which is also heart felt and doesn’t lead to heavy bannered messages or morals but just lets people know that sperm donation and infertility treatment is not a crime. Anu kapoor lived up to the role and is back with a bang and I must say the back bone of the movie and the promos showing him as a doctor treating infertility were interesting enough to pull the audience to theatres. The scene where he explains that Anshuman is Arya putr and keeps on nagging to persuade him is ultra funny.Our hero is none other than RJ cum once upon a time MTV roadie  turned VJ / TV anchor Ayushmann Khurrana (Not sure why two ‘n’s and two ‘r’ s but who ever told his prophecy must have been feeling good too as it worked well for him ;)). I personally always liked him whenever he anchored on TV for Wassup / India has got talent etc etc. He even won an award for JUST DANCE  show! He is extremely promising and being a  Punjabi he looked so damn natural in the movie. Heroine Yami Gautam also seems talented and played the role of a Bengali girl Ashima Roy. Both the lead actor and actress are budding talents from Chandigarh. John Abraham being a producer is definitely a novelty and an add-on to movie is his rum rum rum song :) Am not sure how much he succeeded as an actor but he must have become very glad by taking a wise decision. Anu kapoor is witty and extremely funny doctor and he addressing each person as “confused sperm” “Unpredictable sperm” leaves you with wide smiles!Ayushmans mom and grand mom play equal roles in adding entertainment. Theirs is a typical Punjabi family who love themselves more than anyone else and the atmosphere in Dolly’s parlor and Ayushman assisting his mom is all natural , the scene you come across in any North Indian(Punjabi) beauty parlor!Dolly and her modern mother in law gulping down “n” number of pegs to forget their miseries is also fun to watch!! The first half of the movie leaves you in splits. The highlight and heart of the movie is the wedding scene where sophisticated, modern and calm Bengali Ashima marries Vicky Arora from a noisy ruckus creating Punjabi family. The milaap is interesting with rum rum rum – whisky song in the back ground and where two families gel well!

After Intermission the movie gets a bit slow but as you are in full flow with the characters, story and quirky sensible dialogues you don’t get bored. The movie doesn’t harass you with loads of tears but even the slightest emotion shown in the movie gets heavy due to the humor through out! Finally as the movie ends I dint like Anshuman and his stern face and tears much, may be a fun frolic character all of a sudden shedding tears was funny or rather he needs more practice J The ending is good as they adopt a kid as Ashima can’t conceive but the only doubt I got here is can artificial insemination(with Vicky’s sperm ofcourse) not happen in case of Ashima and cant she bear a baby even if there is a pubic blockage??  Well am not sure if pubic blockage is such a serious infertility problem. Lets leave it to google and more analysis which I don’t want to do and spoil the review.  By the end of the movie the immediate feeling I had is I wanna watch Anshuman again in a much more entertaining movie with lots of freshness without being the sticky stereotype. The lady Yami is pretty with beautiful eyes and smile and acts well too so you can expect to see her around !

Theres no vulgarity or obscenity so you all can watch it along with family and no need to worry a lot as these days high school kids also know how to google and know much more than adults!
Kudos to shoojit and Juhi for showing this bold concept in a light way 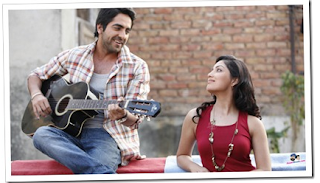 I love pani da rang song sung by Ayushmann which makes it more interesting but I start tapping my feet for the below song which is shown in the end and made me sit till the end of all titles:)