BREAKING NEWS!!---BREAK YOUR HEAD AT YOUR OWN RISK!!!

BREAKING NEWS :::::BE IT A 24*7 NEWS/ A REALITY SHOW OR A DIALY SOAP ::YOU ARE AT YOUR OWN RISK OF BREAKING YOUR HEAD

Media has a large impact on peoples lives. It can make or mar the mind. It has got all freedom which no other person in any profession has got. Media unlike Movies doesn’t have a Solid censor board. It does a sneak peek and grabs a hand ful of news from any where and every where .It has got full rights to shout what ever is not right and if any injustice is happening to some one. Involvement of media can bring revolutions and change people’s life!!But in recent past years the innumerable number of News channels which came to lime light with 24*7 over flowing news are not getting involved in people’s life and helping them but bugging them beyond limits which definitely is misusing the freedom given to them.When the important news dries up media concentrates on trash/crap news of a celeb’s personal life, strife, break up or any thing in which the audience is least interested. At some point the crap creeps so much that the news which has to be in headlines crawls behind the carpet!!!Reality TV/ Soaps cum news shouldn’t definitely be like in the pic below where a hen cooks its own ASS(the best reality show :))!!By watching some channels we even roast our own brains!!! 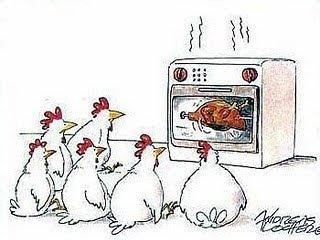 Below are images of few reality shows which unnecessarily make people emotional and the weddings conducted on Television!!!-----I have no words left to explain how stupid they are... and People like fools tend to watch all of them : ( :(. The raaz pichle janam ka hosted by Ravi kishan made even monika bedi and shekhar suman also to come to studio and weave stories was a big flop and am very thank ful to who ever is behind closing this program.This proves there is some brain left amongst us. 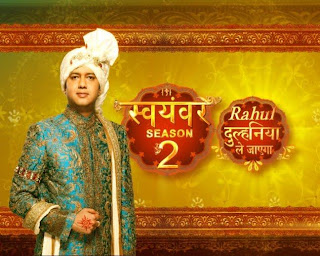 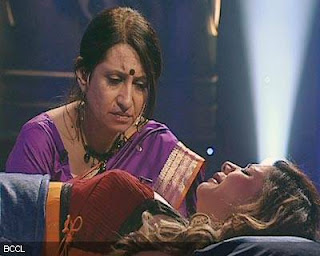 Now coming to NEWS channels you can take for instance AAJ tak news channel which is famous for hoards of BREAKING NEWSwhich is actually crap! Once there was a Breaking news flashing on Aaj Tak.I was watching curiously when a booming voice from behindthe vedio clip shouted Aishwarya Rai bachan neNAzar utaara!! Akhir ye kiske lie ?kab aur kyu? Ye raaz kya hai ? ..and it went on for an amazing 1hr with commercial breaks in between where aish was throwing namak or some ash on to the road which was shooted from a distance ....and was repeatedly telecasted with zoom zip zap ear splitting sounds as if some thing sensational is going on with aish!There was one more news like in below image where Aish 's mood was off during the premiere of RANN...reason being Vivek Oberoi who paid a visit on daddy’s big day! This news showed aish in different mood swings through out the premiere...Parallely there might be other important happening news in the city out there!...........a news definitely much more interesting than the cold war between rai and Roi 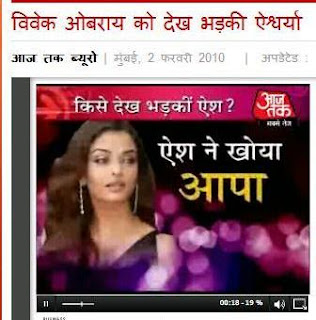 But all our media is interested is in aish’s moods swings or shoiabs scandal who recently got wedded to sania mirza a News or rather a dialy serial which went on for many days ....IT became quite a news in hyd being telecasted in all possible telugu channels where even after gettin g serious warnings of not entering Sania's residence reporters still stayed as watch dogs and tried capturing each and every possible scene inside. In the midst of it ayesha’s Fiasco (who was already married to shoiab) which increased the TRP of the program/ News and they didn’t hesitate to show this twist again and again on TV which made people bored to death !Even the news of Sainas Victory was shunned by Sania's wedding!I wish the crap is cut and news is shown in short!!!not like a dialy episode or atleast the number of USELESS news channels have to be cut to half of the present number. Yes we can always chose not to watch the news..But we tend to watch it as we have to keep track of any important change in the country or world!!but how sick it is to always catch a glimpse of sania and shoaib ON ALL CHANNELS in your serious efforts of catching some other news :(

India TV is no less

. It takes the cake. Be it 'aliens gonna abduct Himesh' story .They show it as its all we want!!!!This is 24X7 atyachar and they even argue that they stick to public demands .Check out below images 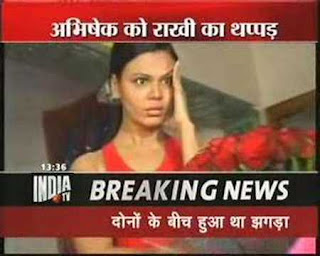 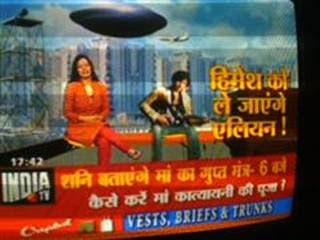 This can only lead to two conclusions

·Public was always stupid. They are just cashing on it

They make public more stupid day by day, and then they cash in.

Coming to SMS polls.. virtually on every possible / non-possible issue! Will someone's Gastric problem end? Will salman be the best match to kat ?Should Sania wear red or green on her wedding?? Should we continue racking our brains or not? ..... We all rant on rising prices on petrol, vegetables, inflation but what about the cost of SMSes on these reality Draculas? 3 / 5 / 10 Rs worth of one SMS. and we send multiple of those.. everyday! Definitely aimed at making "Ass-M-Ass" out of us!!Do u really think Reality shows are judged as per SMS?!!?and even if Votes make them WIN!!!is it a fair judgement always ??Just use your brain friends !!!!

Recently at Dhonis wedding A renowned News channel made a big story even after the wedding ended showing the debris / clean ups after wedding predicting what might have happened! Its hight time media should realise people might be interested in Dhoni’s highlight cricket match but not highlights of wedding , pros and cons which is predicted by investigations on premises!

Predictions :: media is best at predicting news , taking sides or creating news and making their own judgements at times based on haphazard facts for the sake of TRPS...even if its simple news or some major news which can lead to violent consequences!

Coming to the crime and agitating news media puts full effort in showing the ghastly death images so full of life that people get disturbed at times seeing the cut heads , hands , pools of blood like in some horror movie..and they never miss the close up shots. I wonder how they can go and shoot there firstly! Its medias duty to show the crime news and injustice but when it goes beyond the saturation...people don’t feel like watching the TV for news! When there was 9/11 and WTC was attacked not even a single dead body was shown on US news channels ... I hope We too follow the suit and make news little watchable! 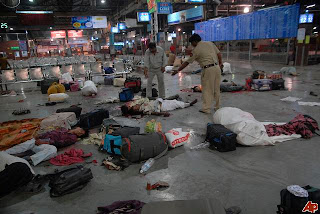 Every one is in deep sorrow on watching such news but no one wants to Turn off the TV out of horror!There are few advantages like Police can catch criminals with the help of media’s proofs .Coming to telangana agitation here in hyd Where many agitated students called out for a strike ,burnt buses. and created havoc were actually not students and not even from Telangana but hired goons!! Which was proved by media’s intervention. I appreciate it a lot ! They are equal to police here saving the state..but I plead media not to show agitating/violent news a lot or cooked up news which is not news at all..............

Media played a key role in catching many criminals using powerful sources like sting operation (the tehelka.com) Just yesterday in news i watched in headlines Today that Saffron Goons attack HT main office coz of some fact of RSS revealed in the news channels! Media has to face this after math many times after it reveals the facts! I appreciate the brave media, but the same media should watch its words!!should put a check point on interfering in lives !

Freedom doesn’t mean you can scan each and every person whenever you like. A person just faced the blast at Nariman’s house (26/11). He escaped death. He all injured was being taken on stretcher and media was questioning him what happened exactly inside? Can he reveal any important details? The person was bandaged and couldn’t speak! And media is expecting answers from him!! The continous telecast of Sex scandals :::: Nityananda /bheemananda swamys and kalki bhagwans news and videos were released first on local tv channels which showed it again and again and again

One joke i heard on radio : A reporter asked a person Prasad : “what is your opinion on swamys like nityananda”

Prasad : “what opinion will i have on him!! He is a cheater like others...but this vedio is even banned on You tube but your channel shows his hot vedios again and again which we actually enjoy! No one can show like that” The reporter says with camera man Raj reporter Srikanth TV007 and ends it then and there !! :-) 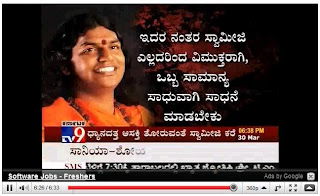 Can go on on this but I want to end my perspective here!! :-)

Ø I wish there are less number of news /reality channels. There are already many tv soaps and reality shows which are again judged on News channels

Ø I wish People become more intelligents and protest against population explosion of TV channels. There has to be a limit on number of channels

Ø I wish people become more educated on politics economy..inflation..technology...achievements of our nation so on so forth

Ø I wish the gloomy news ends and even happy news is also shown for a change..for some positivity to imbibe in our nerves and cells. Even APJ kalam once protested that negative and only SAD NEWS is being dumped a lot in our news papers and channels

And finally if such changes happen I wont feel that there would be a need to hold an award ceremony for THE BEST KICK ASS news channel award and situation will not be like below :-) :-)

I find television very educating. Every time somebody turns on the set, I go into the other room and read a book - Groucho Marx !!!!!

NOTE: THis post is for the blogaddas this week competition @"IS Indian Media--Misuing Its Freedom?" in association with pringoo as a partner