Cricket is our religion and Sachin is our God!

My third article on " Half Baked Voices "

Almost every Indian who has access to media and cricket would know the declaration by many die-hard fans that, “Cricket is their religion and Sachin is their God.” There is no denial here. The three things which always flourish in India are religion, Cricket and movies. Of course weddings can also be added to the list. Be it legendary players like Sunil Gavaskar, Kapil dev, Mahendra singh Dhoni , Rahul Dravid or the master blaster  Sachin Tendulkar, people worship all of them. Even if hockey is our national game its cricket which strikes chord with the nation. People celebrate if the team wins and don’t mind using profanities and burning the effigies of their favourite players if the team loses. Our country is obsessed with their cricket stars and celebrities.  The coca cola caption works for most of us in India which is – Eat Cricket, sleep cricket. Drink only Coca Cola. 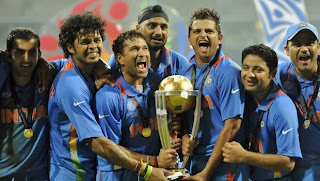 Not long back, when I was in high school I remember my dad pasting the newspaper cut out on the cupboard. At first I thought it must be something related to office. Later I realised it is the time table of the test match series of that season. I was surprised seeing how much my dad adored the game. The love for game was contagious at home. My mom who doesn’t know the C of the Cricket started learning the match. She understood what it means by no ball, run-out, clean bowled and many more things. We also understood what it means by body line bowling and match fixing. Our hearts always race when India plays with Pakistan. I still remember the news program where Kapil Dev shed tears like a baby when he was accused of match fixing. Anything related to cricket is hot shot news and sells not for days or months but for years and centuries including Sreesanth’s controversies !
Read the rest of the article here and leave your comments and opinions on the   "Half Baked voices blog"
- September 20, 2013