The title should have been "Matru Ke Bijlee ka Mandola ki Gulabo " - A review :P

Matru ki Bijlee ka Mandola - As and when I heard this name it felt like some Nelson Mandela's Indianised autobiography or some thing. To add to my belief there were few South African dancers as well. I thought its a movie which will show whites Vs blacks issue or some thing close to that :P. Demolishing all my guess works the movie surprised me with fresh entertainment. My love towards bollywood only increases due to these new refreshing ideas and the new style in which they are executed. However this movie has its flaws!

Trailers failed to draw me towards theater which showed a piyakkad Pankaj Kapur and Anushka who is coming out of the pond comfortably as if she is a mermaid showing her famous tattoo, the image of which was viral over the net , a UFO scene and our chocolate boy Imran Khan who tries his level best to look rough and untidy but still has chocolate flavor intact. In-spite of not getting attracted to trailers I went to the movie as I got positive feed back from few! 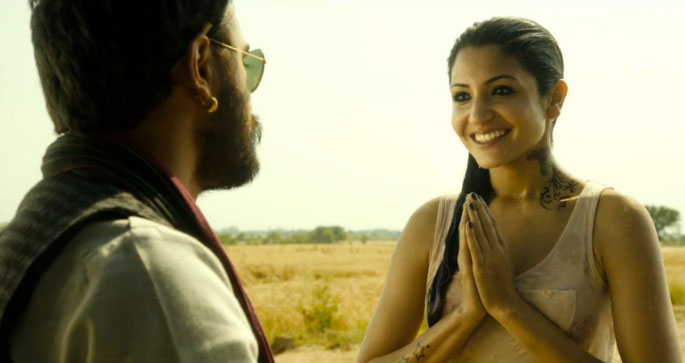 Story Line : The basic idea of the story is age old which is Rich Vs Poor . A rich real estate businessman/ capitalist Mr. Harry Mandola after whom the village is named , his rich rebellious daughter who is hard out side but soft inside who suffers from Meenakumari complex is played by Anushka aka Bijlee Mandola. She wants to save the cheated, devastated people and hence joins hands with Matru who is Mandola's left hand cum Alcohol partner. The opening scene itself is very slow where Matru and Mandola run over a alcohol shop when the owner refuses to give them Gulabo- the local drink of Mandola. The film has a rebellious character Mao Tse-tung(a Chinese leader) who wants to save the villagers, whose where abouts are known to none.

Mandola is a Gulabo addict and he is much wiser when he is drunk and becomes a villian again when he is sober. He even provokes the villagers to protest against himself when he is drunk :) . He has visions of a pink Bhains (buffalo) when he stops drinking. The scene where Pankaj Kapur is being tested by a psychiatrist and he says he is seeing pink buffalos is hilarious as Docs wife wears pink track suit. Due to his drinking problem their dream to construct factories in the farmer's fields gets hampered. Enters Shabana Azmi a political leader on whom Pankaj Kapur aka Mandola has deep crush. She needs Mandola's help and money to fulfill their dearest dream. Her Son Badal played by Arya Babbar's wedding is fixed with Bijlee but soon she realizes she doesn't love him and wants to run away with Matru.  The scene where Shabana lands at Mandola and the way police officers receive her controlling the puke due to the previous nights drinks is both hilarious and irksome :)

The cameos done by Ranvir shorey and his wife are not worth mentioning and the songs are always finished in a hurried pace hence I cant say music is gripping or pleasant. Oy Boy Oy Boy charlie the karaoke style song is the one I loved most !

How the story unfolds and how the alcohol-vice makes an otherwise Mandola a wise man and whether it will save every one has to be watched on the screen!

Lastly Kudos to Vishal Bharadwaj as he carries the movie on his shoulders and acts like a one man army. He directs , writes , does screen play and gives music to the movie too. He definitely is flooded by talent pools but I feel a little more finesse is needed to this movie. Nevertheless I liked this more than 7 khoon maaf or Kaminey 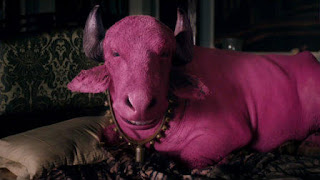