Most spectacular watch of the year

This book is in my to read list from long. I couldn't read it till date. I was just thinking to grab the book and start reading that the movie released on Nov23rd . Produced and directed by Anglee and based on the novel by Yann Martel the movie has already got showers of appreciation. The visuals are sheer brilliant. I cannot analyse the movie technically but what I can say in short is “Every one was awestruck by the visuals and didn't turn their heads in the fear of missing the beauty on screen” .All have started comparing this to Avatar saying it well deserves an Oscar! I can’t disagree. The visuals were spell bounding. Director Anglee used the 3D technology intelligently and shrewdly grabbing audience’s attention. The CGI tiger Richard parker which actually didn’t exist amused me a lot. Anglee who made crouching tiger, hidden dragon proved that he will continue enchanting the viewers! The boy who plays the 16yr old pi patel deserves a round of applause for his flawless rendition. Irfan Khan does what he has to . He being the old pi narrates his own story to a visitor who wants to write the book. Adil Hussain and Tabu who played Pi’s parents were a south Indian couple who were natural to the core and made a lovely duo though they played a short lived role.

If you read the book well and good. If you haven’t and don’t want to know the story before you watch give this a miss .I will have to narrate few bits here as I cannot exclaim at the marveling experience I had while watching the movie without revealing the story. The movie starts with Irfan khan narrating the story from the start to the man who visits. Irfan’s Mamaji suggests the name Piscine Molitor  Patel to our Pi which actually is the name of a famous swimming pool in Paris. The name pisses off our young Patel as he gets teased by every one at school who shout “pissing” at him. This role was played by  Ayush Tandon (age : 11) . A boy who is a deep thinker , reads a lot and analyses each and every aspect he comes across.That is the reason he wants to understand and follow good aspects of every religion. He was born Hindu but follows Christianity and Islam as well in contrary to his dad who is a staunch non believer . Tabu plays the role of a sweet mom who gives enough freedom to kids to think and believe.

Adil Hussain aka Santosh patel is a zoo keeper and hence they have wide range of animals when they decide to move to Canada as they feel there is no future in Pondicherry. The 16 year old Pi Patel played by Suraj Sharma enters the screen when the actual movie starts . He falls in love with a dancer Anandi but has to leave her when they decide to sail to Canada !Few dialogues do impact you a lot and the emotions are so clearly displayed like the blue serene water of the sea.

Irfan says to the visitor played by Rafe Spall that he remembers every thing from that evening he met Anandi, the promises and all but he doesn’t remember bading a good bye! I  was touched here :)

The real story starts in ship after the scene where a  rude  cook refuses giving them vegetarian food and they shout and fight and a severe storm hits the ship which leads to wreckage and the only survivor in the life boat is Pi along with Richard Parker (the tiger) , a Zebra , Hyena and a Orangutan by name Orange juice! A tear came to my eye when Pi asks  Orange juice “where are your kids?” the parent Orangutan looks at sea as if giving him answer that they are in the belly of merciless sea! This is the most touching scene to me.

The whole story revolves around Pi’s struggle to survive , to save himself from the Bengal tiger and also to try and tame him or at least act so in order to create a dummy zoo atmosphere. I loved the way the boy acted so intensely. He feels happy that he is not alone and simultaneously is scared as there is a permanent threat of tiger relishing the skinny vegetarian boy! Hence he stays in a safe distance.

In the life boat Pi keeps himself occupied by jotting down all his experiences with a pencil. There is a scene where there are millions of flying fish soaring just above them . I must say this is the most brilliant shot of the movie. 3D just made it more magical. My jaw dropped looking at how the serene sea can become violent too; the beautiful waves can be haunting and life taking too. If titanic was one spine chilling kind of experience this movie also leads to a similar feeling but there’s a ray of hope as the boy is not dying even after he lost his family ! 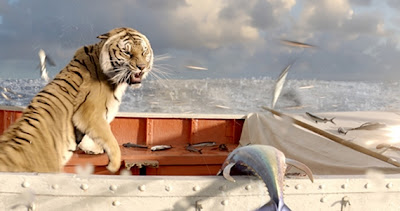 Richard Parker is one more marvel in the movie. I absolutely loved this tiger and his natural expressions. It feels bad when the ferocious tiger becomes weak, lean and keeps gazing at the sky as if accepting the fate. The starry nights , the clear blue sea water, the camera showing underwater and the life boat and even sky from there ,stormy waves and the mysterious island where Pi finds thousands of meerkats and discovers that the algae are carnivorous  with a human tooth like thing inside the fruit is all unbelievable and heavenly. The visual effects prove that the movie has a good chance to bag an Oscar !

By the time life boat reaches shores of Mexico Pi is starving, bony and feels more devastated as Richard Parker escapes in to jungle without at least looking back at him. Folks from the Japanese freighter company don’t believe the eye witness story of Pi, so he tells them a different one in great detail with humans on the lifeboat instead of animals , but the visitor feels the initial story with animals was the best among both. The ending could have been much better. I felt slightly bored when Pi narrates the alternate story to Japanese. It was ambiguous. You may understand if you read the book. The fighter Pi cries profusely at the loss of Richard Parker. I kind of disliked this aspect. Being a great fighter he could have fought back the tears . Pi’s spirituality and belief in various gods and  the way he survives remembering each god ,  the way this aspect was dug deep in the book is not done in the movie.

Nevertheless this one is the most spectacular watch of  this year and for sure a visual treat. I can use many more adjectives like surreal, mystic, and magnificent to describe the movie and bravo to the director and the team .I am dying to read the book now :)