Poems are written when you are ecstatic, when you have to express something with lot of intensity and you are falling short of words and just conveying it through speech will not do justice to that expression. Whenever you read a poem you instantly go back in to your memory lanes or start pondering or  just smile broad or get lost in thoughts. Poems ignite many kind of feelings in you. Being a poet (not sure if my  poems are still amateur;-) )  I loved reading this book but frankly even before jotting down the detailed review I must say I won’t be doing justice to this book review as I was not able to finish it. The name of the book is so apt – “Ah poetry!” It is loaded with so many beautiful poems (more than 150) that I was not able to finish all of them in a week. Frankly reading a poem and feeling it depends on your mood and reviewing poems- my god!! Initially I thought it’s an easy task as they are just poems, but ,hell  NO.Reviewing is all together a big challenge because a poem can only be felt or expressed. Reviewing the poem is not a cake walk and with so many poets and too many poems you will be bewildered as to whom and what to praise! 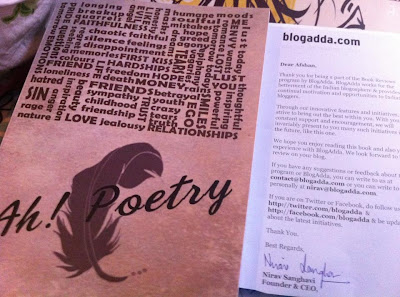 I loved many poems but excuse me for handpicking few favourite poems in this review, which I could understand instantly and these poems were effortless and easily felt. Many have written real heavy and intense ones of blood, war, religion, failed relationships etcetera but having read the poems of this genre many a times I liked a different genre this time. The best thing about this book is it is contemporary with many genres, all clubbed in a single book. Some people have weaved stories around poems and some let out their personal stories hidden between the lines and some didn’t mind expressing them directly. Once I almost finished reading the poems I felt like I read too many stories. That was a good feel!

Now I want to list out few poems which I enjoyed. It doesn’t mean the other poems are bad. It just means that some are too huge and heavy that I couldn’t sink in what all is written in this short span of time. Some were too strong and intellectual for my level of understanding :)

First poem which caught my attention was written by Ajinkya.H.Raut. He wrote a poem "Relationship in a Box" which describes that few relation ships which don’t work make you feel like you are trapped in a box with that person and there is no progress or love in that relation . The poem is not dumped with heavy emotions but still can make you thoughtful! Akshat Gupta wrote a poem “A Pocket full of memories”. It easily makes you remember some fond or cold or lost memories but my favourite poem is “A Billionaire” written by him which describes a person who is a billionaire but still a pauper as he is drowned in his desires, thoughts and dreams about that only person whom he couldn’t get. I loved the way the poem flowed! I also liked Amanpreet Singh’s  "Vacant Horizons". It’s touchy!

Amit Charles aka Scribbler's poems are also effortless. The way he wrote "Ammamma Puttu and the Summer Rain" reflected nativity and reminded me my days with granny. It  reflected innocence, childhood and many memories! I was lot touched by Anand Madhukar’s “Letter to my Father”. By the end of the poem I literally let out a sigh and couldn’t read any poems further for a while.

Anantha R a engineer in Cognizant finally made me laugh J I loved the way he wrote “I’m Ready for marriage”. This man can tickle your funny bone! His other two poems “Sangameswar’s new Roti maker” is equally funny and you can almost visualise the whole poem! He explained recession effectively in his poem “Communists or Democrats”. Another person whose poems I loved a lot is Anu Cowlagi. I liked all her poems. “Shower of Love” describes the tender mother’s love. “Perspectives” is amazingly written describing media as a new terrorism. Liked her last poem in the book “Time” as well. One more thing I need to mention here is most of these poets write blogs. I have gone through few of them and really loved many of their other works and poems!

I was touched by Baljeet Randhawa’s  “Do trust my silence?” . Nothing to describe it. You must read to feel it. Spare her a thought by Dolly Singh is good! Hiral Trivedi’s short poems are good. Krishna Dasani’s "Modern Myth V. Eternal Truth" is too good and you feel relieved by the end of it! Loved Leenuka Reddy’s “Meandering lines” which describes kismat is not connected due to the criss cross lines on the palm but by holding each others palmsJ Nishant Singh’s April’s Wing is again a journey to childhood. Thanks to Nivedita aka Devenita Er who finally cleared the confusion I had about a word “Haiku.” Pravaas Ranjan aka V@@S’s short crisp and clear poems were good . For instance he wrote a poem.

Road
I presume that I walk alone
But still I see, a road constantly
Walking with me.

There were many such good poems by him.

The way Prerana Choudhury described poetry just before her poems started is good!
Some poems described the nature , rains  and coffee during rains so nicely that I could almost get a whiff of hot chocolate coffee like Rohan Sen’s “I can smell the Coffee When it rains” which describes rain,coffee and meeting an impressive stranger J There are many such poems describing nature beautifully! Shashank Mishra’s “Those papers in my Drawer” will instantly flash many images in your mind’s eye! Loved it. Liked Shigufta Uzma’s  “The Changing Prefixes and Suffixes” which describes marriage, change of surname and mocks it which you feel is aptly done and last but not the least I want to end it with Yamini Periwal’s “Invincible.” A poem filled with positivity and can make you confident. Loved it in and out. Kudos to Yamini. So the book ends with Yamini Periwal’s poems but when I was closing the book I felt the poetic saga is never ending! I know I missed out many names here. I want to repeat this again thatI had to skip some poems on terrorism, wars, attacks , blood etc as they were falling too heavy on my brain. As of now I loved the breezy ones! Some other time when I re-open the book I would love to read and understand the missed out poems. All in all it has been a great learning experience to me and quite a challenging task to review this book. As I finished writing this my feeling  is "Aaah- I can write it!" :) After reading this book I feel like refining my own poems and writing few fresh ones.Lastly few images should have been added in the book which would have made them more realistic. Thanks to Blogadda for giving this amazing opportunity and for making me float in the “POETIC CLOUD” this whole week. This book definitely can be treasured! Kudos to all the poets who are a part of it and would love to see their individual books soon!!

“The whole week I was floating in a poetic cloud.
Sometimes I frowned, sometimes I laughed loud!
Sometimes I thought for long, at times I was moved.
By the end of the week my brain has many poetic seeds sowed!!”

This review is a part of the Book Reviews Program at BlogAdda.com
- June 15, 2012

Email ThisBlogThis!Share to TwitterShare to FacebookShare to Pinterest
Labels: Book reviews, For Blogadda.com