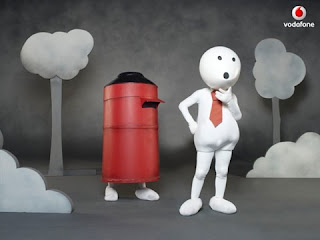 on just giving a glimpse, these "zoozoos" in Vodafone TV ads may resemble animated cartoon characters with an alien look or simply a stupid egg-head character with disproportional white bodies and black dots for eyes and mouth.

These Zoozoo characters, have been created by O&M for Vodafone to convey different value added services offered by the mobile phone company including phone Backup, cricket alerts, etc.

This was something which was created purely out of textbook and is totally an Indian idea. The characters are such that they lead simple lives, speak insane and incomprehensible language and move in a certain way with human emotions.

But the interesting part is that Zoozoos are not animated characters but are actually slim women actors from local Mumbai theatres, dressed in white costumes that are stuffed with foam to portray the characters.

Prakash Varma, who directed the Vodafone ZooZoo commercials, told Afaqs that they only had women – and occasionally children – as their main cast to keep the hands and legs thin of the Zoozoo characters.

What do u feel abt ZOO ZOOS frends?