GANGS of WASSEYPUR - 2 - The bloody Saaga ends breaking the records and busting your asses!!


My Rating : Can some one rate this bloody GANG. No am not taking the risk :)

so please go on !

Its a real challenge to review the blood thirsty Gangs boiling with vengeance who came back to fight for one last time. Firstly I take a bow to GOW for its sheer brilliance , excellent execution where outcome is fantastic. A review will fall short if you want to applaud the Wasseypur sketched by Anurag and actually written by the group of people mentioned above!  Zeishan Quadri will stay in your memories as "Definite" whose maqsad is always clear. He wants to imitate Salman Khan and is actually more intimidating than Sallu of Tere naam and loves fooling around and at the same time wants to sit on the throne of Wasseypur!Subtle hints given in the story that Indian Public will always be puppets in the hands of "CINEMA" when its shown that Phaijjal(Faisal) khan uraf Nawazuddin Siddiqui wants to be a Amitab bachan and also tries to woo his sweet heart Mohsina (Huma Qureshi) mentioning shahrukh and salman is hilarious and damn real at the same time. Its not exaggerating as it is the way many people behave in our country. She is a voluptuous beauty who dimmed many bollywood damsels in my honest opinion

Tigmanshu Dhulia's (Rama dhir Singh's) revelation that every one wants to be a hero. SABKE dimaag me apni picture chal rahi hai and he pities his son for watching DDLJ saying he is for no good and his dialogue Jab tak Hindustan mein cinema bante rahenge, public ch****ya banti rahegi  and he says he sustains as he doesnt watch movies. All these facts are intertwined with wacky humor and even with lot of blood shed you will not feel that you are subjected to gory scenes due to the humor embedded so beautifully. DARK humor of Gangstas is better than many unlaughable jokes  in the recent comedy releases. As there is a lot to review I first want to appreciate many characters. "PELPENDICULAL" (the way Babuwa , the youngest son of Sardar khan says perpendicular) played by Aditya Kumar is a new memorable character who wants to look dangerous with his killling using a blade expertism and also at a tender age he starts looting and scaring the hell out of people using his brother Faizal's name. He who becomes a big sanjay dutt's fan after Munna bhai names Tangent as Circuit and   at many junctures unconditional love for bollywood is shown ! 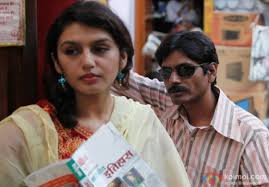 Its more cute than funny when he mentions about  his side kick that"Iska tangent aul mela pelpendiculal gaya " when learning shooting! Women of Wasseypur need a special mention as they are not weak and to them Vengeance comes before love and many other basic needs. Richa Chadda shows she can do much better when she settles down as a widow who cant rest till her sons plunge in to action whose blood is not boiling enough to wipe away the sultan territory asap. The way her eyes have black shadows and hair shines in Henna color so as to hide the grey hair is so naturally shown.

Music
"Taar bijli se patle hamare piya ori saasu bata tune ye kya kia" stands apart among all songs. The way the song  transforms from being funny to a grieving Nagma who remembers the dead husband and elder son is not overdone and fits the moment. Its amazingly sung by Padmashree Sharda Sinha (Bihari folk fame) and ofcourse music intelligently composed by none other than Sneha Khanwalkar. A standing ovation to this girl in red fiery boots who is all set to make fast and furious music which blends with the movie so well. To me the music of GOW 1 is awesome and it doesnt mean GOW 2 music is substandard. I liked GOW1 music a little more :) How can one forget O womaniya and kehkelunga but definitely all the songs created a new trend. Kaala re saiyyan Kaala re is the diamond of GOW2 which describes the Saiyyan , his dil , his work , his accomplishments all as DARK. The purpose dark and the out come dark . The usage of english words and phrases like "I am a hunter she wants to see my gun" if made you laugh the below lyrics will make you feel tad sad when Mohsina tries to lift the spirits of Faisal in Prison and also a scene where he is frustrated and shows his angst on his father Sardar khan who had a chance to escape but he started it all. Its a bit touchy  and also funny- the way the english words are used
Frustiyaao nahin moora,
Narbhasaao nahin moora,Anytime moodwa ko,Anytime moodwa ko,Upsettaao nahin moora...Jo bhi wrongwa hai usey,Set right-wa karo ji,

Glimpses of Story and the Characters

The story starts where exactly it ends with Sardar's body ready to be buried and the best part of the movie is there is no unnecessary wait. Even the dead body doesnt make you feel sad due to the funny intervention of Yashpal Sharma who previously sang in both male and female voices sings 80s sad songs like "Yaad teri bahut sathayega" and the other similar songs "Teri meharbaaniyan" etc who is the hit entertainer of Wasseypur - be it any occasion :) . You instead of shedding tears will just laugh off when ever he appears on the screen. The blood shed starts almost immediately after Daanis (the elder son) is provoked by his mum and he kills few from the gang who lead to his fathers death and Saba (Danish's wife) requests him to stop all khoon kharaaba so that she doesnt join the league of widows but Daanish pays deaf ear and as an immediate effect gets killed by Sultan. There is one more funeral and Outraged Nagma (Richa Chadda) shouts at his Gaanja doped son Faizal saying she will cut all his 10 fingers who she thinks is fit for nothing.

At that moment Phaijal Khan takes an oath that he will take revenge on every one and wont look back and he totally sticks to his word. You can then see the merciless blood shed all over the screen which starts with a head cut and hanged infront of the dead man's house. Faizal creates terror all over the place and he wants to rule now and every one starts imitating him. During Sardar khan times it was Sardar Khan Vs Rama dhir with Sultan oscillating but now every one is power-hungry and wants to be a Sardar Khan ! Raj kumar Yadav (LSD fame) needs a special mention here who befriends Faisal to earn more name, fame and money and wont mind doing any kind of fraud to gain power. The story narration again by Piyush Mishra is defnitely an asset.

Post Danish's death even Perpendicular is chased and killed which makes Faisal more furious and he states to his mom " Jaan hi to hai ya to allah lega ya muhalla". In midst of all this the year wise progress from pagers to cell phones , from dilwale dulhaniya to Munna bhai MBBS, warm love tit bits add spice to the cold blood shed . I can say that this movie is like Ugadi pickle (made on Ugadi / Gudipadwa using neem leaves chutney , sugar and many ingredients) which holds several flavors and tastes . Mohsina and Faisal's courtship scenes are extremely funny and not vulgar .  The way Huma teases Faisal that due to his Ganja and other habits he looks like a old man and he gets angry and threatens a fellow shopkeeper hoping he says a better number makes you smile!

All the subtle fun moments of Faisal and also Definit when he requests / orders all ladies to go inside the home cant be missed!

The funny discussion on how we can enjoy jack fruit and all the confusion created due to multiple phone conversations by the  mad cap clan of Faisal while plotting on how to attack Sultan when he is in market will just start a laugh riot among audience. To me its the funniest scene :)

There are many comedy tit bits . There are fun , tragic , not so tragic and also fun-tragic moments in the movie. Even when it turns pitch black when sultan attacks Faisal's home you wont be disturbed. You will rather crouch and wait to see what will happen to Faisal next. The killing becomes endless , meaning less and the ray of hope to live with out vengeance becomes hopeless.

First time women are killed in Wasseypur and this increases Faisal's revenge 10 fold and he is all set to kill  Ramadhir and any one who comes on the way and the killing and bloody pools just flow non stop . Blood flows profusely and Faisal who entered in to skin and soul of Nawazuddin enjoys the moments absolutely. The way he kills Ramadhir is better than many hollywood movies and Deborah Young of The Hollywood Reporter called the film "an extraordinary ride through Bollywood’s spectacular, over-the-top filmmaking".Referring to the violence and pace of the film she says "Gangs of Wasseypur puts Tarantino in a corner with its cool command of cinematically-inspired and referenced violence, ironic characters and breathless pace" (source : Wiki).Faisal savoring each and every death sight of Ramadhir is one heck of a sight to watch and then what happens next makes you feel real sad this time and I actually felt sad when the movie ended .

Even if its a bloody saaga, the characters which just entered in to me made me crave for more of it ! I dont care if it resembled God father or Pulp fiction or Torantino but to me this is a world class movie which intelligently gets it self out of all these movies even if it resembles here and there and stands alone on the throne.Indian cinema with this movie deserves to be entering in to International hits ! I just wish it bags awards and accolades in many Ceremonies !

I might have missed appreciating so many people and so many characters. If Manoj Bajpayee stole my heart Faisal left my stomach empty craving for more and women like Nagma and Huma  showed how strong they can be, inspiring women at one or the other point. I just want to give a loud applause and standing ovation to the entire cast and crew of GOW I and II ! Though its a long movie you only feel that you are witnessing every bit of Wassey pur in detail. Gangs Of Wasseypur II provides enough cinematic brilliance to discuss for years! I wonder if we can actually write a book based on the movie.

My rating : What the hell A Hy- Five / 5 to this cold blooded revenge drama which is not extremely dramatised , to this fun filled tragic saaga which doesnt have any unlaughable jokes , to those love bits and bollywood intervention which are so realistic ! I am not sure if I did justice to this review. May be I may write 2 more posts when I remember things I missed out  but just wanna say you are one heck of a story  teller Anurag and waiting for many more block busters which can just bust ones A**